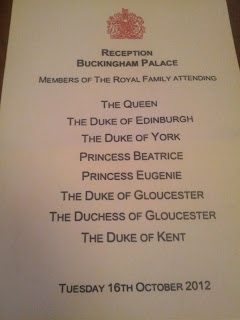 Prince Philip: What's that you're eating?

Peas: Hello your majesty,* this is goat's cheese....er, Would you like one? [Pointing to platter]

Colleague: What is your favourite cheese, Your Highness?

That is a conversation I had last night with the Duke of Edinburgh, The Queen's husband. Just by accident.
Not a normal Tuesday then.

He was ambling up to us, through the 300-strong crowd inside the Palace, after myself and my colleague had shaken the Queen's hand and were introduced to her. So already a bit wobbly and in shock, we were on the canapes and the champagne when he came over to us.

It all started out fairly innocuously. Got another beautiful invitation (I was summoned. They summon me), a few weeks ago and didn't think much of it to be brutally honest.

I have been in the fortunate position to have worked on a Jubilee project, so have been to Buckingham Palace a few times this year. Mostly for meetings, but have cracked the odd invite to a Garden Party and the Jubilee concert.

Where The Queen and other Royals have been present, they're always too far away to be "addressed," so I thought when getting this invitation of a "Jubilee Reception" after hours/in the evening (although that should've been a clue to be fair), that it would be the same deal. Like at the Garden Party we went to in the summer, where we saw Her but didn't meet her.

Then my colleague told me that I was going to shake The Queen's hand while walking up the steps inside the palace.

"Good one," I say laughing. I really thought he was taking the piss. I was, after all, only wearing a very office-like cream shift dress from Zara and black heels. This can't be right. He assured me that it was ON, I was to meet Her Maj, so I quickly cornered a doorman - a very regal-looking fellow wearing a red blazer with the gold stuff all over it - what the heck I had to do when meeting The Queen.

Totally unprepared. No idea what to do. My colleague was a guy, so he would need to do something different to the girls right?

Told I needed to courtesy (I practiced), say "Hello Your Majesty" and then if she engages in conversation further, call her 'Ma'am.' Look her in the eye. My name would be read out to her as we approached, so she'd know who I was and from where.

Anyway, what an incredible honour. They spoke to everyone in the crowd - it must be exhausting - at one stage The Queen was stood next to me, talking to someone. I could see the veins in her hand and every detail of her handbag.
Surreal.

Other Royals were there too, like Princess Eugenie and that naughty Prince Andrew. Heston Blumenthal, the famous chef, was standing nearby too, as was Gary Barlow from Take That.

As our mobile phones were stashed safely away with our coats, I burst home to tell The Brit who also thought I was attending a normal, everyday work do.

Still buzzing. Can you tell?

"and the queen was stood next to me" lol talking like a real brit now.

Chan - they did! :) Only saw last night - pretty surreal to be honest!