This is what I must've looked like. This is the face of a mother who has just been told she is carrying twins.

It's been hard to hide that for four months.

To say that there has been a seismic shift in everything that I've ever known to be real, true and planned, well, that's a slight fucking under-exaggeration.

It was middish August, height of summer,  was swashbuckling my way around the pub on a lovely Friday afternoon, enjoying the crispiness of my cider(s).

It occurred to me - in the pub - God knows why I had this thought inside a pub - that I should probably take a pregnancy test. I was late. Given I had been travelling - Malta, Borneo, etc, I didn't think there was anything really to worry about, so I bought one of those cheap guys from SuperDrug.

Yeah. There were two blue lines.

The Brit and I decided not to panic, because there was no way (right? right?) I could possibly be pregnant.
We bought another one. Same two blue lines. Still decided to not blow this completely out of proportion - "we just can't possibly be pregnant, surely?" Decided to wait a week and buy the expensive one. The ClearBlue test. The one that tells you how far along and was apparently "99.99999% accurate."

It told me I was 5 weeks pregnant. Mild panic and hot flushes. "But how? No, but how? No, but this wasn't meant to happen straightaway? I have endometriosis, so but how? It's too soon, but how?"

We had just bought a house. One that we had to rebuild in some areas. The timing wasn't ideal.

Had to attend the Brit's brother's wedding, which was slightly stressful as 1) I had to pretend I was drinking, 2) felt sick and extremely tired and 3) overly hormonal and scared.

I was about 7 weeks in at this point, when I started bleeding.

As much as I wasn't prepared to be pregnant, I did think I was having a miscarriage, which was a bit horrifying in itself.
It's when I realised that actually I'd be really gutted if I was going to miscarry. I got told to head to A&E at the hospital, Brit at my side, feeling anxious and not quite knowing how this would all end up.

And this is when it got suddenly very very intense.

The hospital booked me in for a scan, so they could see if I was in fact, miscarrying. I told the Brit he didn't need to be there, there was nothing much we could do now anyway, no point two of us being disrupted from work, it would just be a quick thing to determine what was going down.

Midwife: As you're only 7 weeks along, we won't be able to see much, but if your baby is fine we can pick up a heartbeat with a scan.

Midwife: I am going to have to ask you to spread your legs.

She presented the vaginal scanner. A little scary, and does pretty much what the name suggests.

Midwife: Right let's see....I can see there's been a slight tear in your uterus, and there's a small haemorrhage.

Peas: Right, but is the baby OK?

[She's frowning now, while she navigates the scanner]

Midwife: No all is fine. There's just a lot of movement happening in your uterus and I am finding out why.

Even so, nothing crossed my mind except for "Oh, maybe it's hanging upside down" (?) or "Maybe it's doing something funny like a cartwheel" (??)

Midwife: OK. There are two in here.

Midwife: [Smiling and avoiding eye contact] You are pregnant with twins.

Peas: [Bursting into tears] Show me that screen, NOW!

At that sudden moment, I felt my life literally change forever. It sounds dramatic, but at that very moment, the universe changed for me. I cried for three reasons.

1) Relief that my baby was OK. I knew then that although this was unplanned, I still wanted this baby.
2) I am crazy hormonal. Right now I can cry at the drop of a hat.
3) Sheer, crazy head-blugeoning shock.

Twins? TWINS? What. The. Actual. Fuck.

How on EARTH, did this happen?

Not once, in all my days, years of being alive, did even the possibility of having twins ever cross my mind.

Midwife:...so..this is a normal reaction by the way.

Peas: [Bawling] What on Earth am I going to tell my poor husband? How are we going to cope? What the hell, how has this happened?

Midwife: Just breath.e OK. Breathe. Take your time. Here is a picture of your scan. 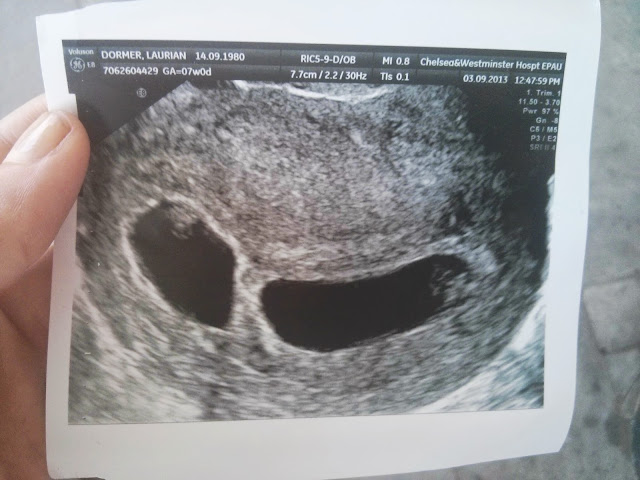 My twins at 7 weeks old. Those two blobs inside the big black blobs? Those are babies.

For the next hour, I walked around in circles in the hospital. In a shocked daze.

I phoned the Brit.

"How was the scan, are we still pregnant?"

"Are you sitting down."

Repeat the above conversation, except take away the midwife, the vaginal scanner. The Brit didn't cry, but he did sound like he was going to have a heart attack at one point, and jumped into a cab to meet me at the hospital.

Where we both proceeded to walk around and around in circles trying to work out what the fuck had just happened.

I then had to head back to work and go to a meeting. And pretend that nothing had just happened.

Absolutely over the moon for you guys. Sheesh, I can only imagine the shock - but can't think of any better double shock. :) :)

I must be hormonal too because I almost got a bit teary reading this post....or maybe it's because after so many years I feel like I know you and I'm sooooooooooooooooooooooooooooo happy for you!!!! I remember you writing a while ago about your endometriosis and pregnancy, so this is really special. And on the bright side you can have your whole family but only need to be pregnant once, win!

No half measures for Peas. Don't just do something, do the fuck out of it! :-D

Can imagine the shock but unbelievably happy for you both. Plenty of excitement in store and life just got better. Take care of yourself and the little ones. The house can wait!

lasinsa said...
This comment has been removed by the author.
9:13 am

Congratulations! Soooo exciting!! And terrifying. That is pretty much how I felt when I was told I was pregnant with twins!! Heee heee this is going to be a twin mommy blog!!

It will be the most memorable ride of your life and you're going to make two kids very happy as one crazy ass Mamma!!

Oh and the Brit can light himself two cigars, might as well start practicing having one in each hand.

I just knew you were expecting, but twins. Holy. Wow. Congrats to the whole new family!

peas, thats is amazing, I am so stoked for you!

Its going to be a hell of a journey, thats fo sho!

Love from Meagan in Oz

I am educating myself via a realm of books, twin mother alumnus, forums etc...and think I need to put this down for a while so that I don't reak out entirely.

Wow Peas that really is quite spectacular. Best of luck! My nephew and niece are twins (happy 10th birthday today actually) and they are such a blast. Although, she did point out to him that she wasn't going to spend her whole life waiting for him and he accused her of being a dream spoiler, still they have a very special sibling bond.