Well the weather has been fucking dreadful.

As to be expected this time of year, sure, but this didn't thwart our enthusiasm and vigour - perhaps wrong words - let's say "drive and determination" to head out on a street art tour of East London.

It's been a while since I ventured into the heart of Shoreditch - probably about a year since I've spent time there - and it's so ridiculously cool, the people so overly trendy, you actually wince a bit. I thought about the new shabby chic intentions for our living room, while we roamed the streets of London's trendiest district, fitting in with the Claphamesque style young families tend to adopt -  and felt ever so staid.

There is still a huge piece of me that wishes wistfully that I had lived in East or North London for a period of my London life, as it's literally another city compared to the green, open poshness of South West London where I have lived for almost 4 years.

It would've been nice to live in the edgiest part of London for a bit, where urban decay and concrete rawness crawl right through the neighbourhood, and everything changes from one week to the next. Where high tops, granny spectacles and purple hair are synonymous with the night scene. Where the edgiest of music scenes is underground, all while wearing your Nan's crimpolene night dress out on the town.

It's kind of how I feel about New York now. I would've loved to have lived in New York for a year, seven years ago.

Anyway, the point I'm trying to make (sorry) is that Shoreditch looks and feels more and more like Berlin as time passes. Almost too cool. And this time was no different, as I waddled around, needing a pee every 12 minutes, as massive as a rhino.

As part of our "let's do as much shit as we can before I pop" drive, I booked the Brit and I on this tour and would highly recommend it to Londoners and tourists alike. It was brilliant.
Two hours, strolling the streets where street art and graffiti aren't actually strictly illegal; the area generally embraces it, much like in other parts of the world like San Francisco and Harlem in New York.

As a result, when you really take time to observe, the streets around Brick Lane, Shoreditch High Street and the Tower Hamlets alleyways are filled with some of the most extraordinary artwork in the world. There is so much talent, when you look beyond the silly tags and scrawlings - when you see some of the more famous street artists come through time and again in different spots.

Our tourguide Joey did a brilliant job of describing from whence each artist hailed, and how some had cashed up and commercialised (Banksy and D*Face), while others (like Stik) still very much led a life "on the streets", coming from homeless backgrounds and using art to claim ownership on public property to express themselves.

Anyway, here are some of the extraordinary pieces we saw on our tour. I took so many pictures, so will only share my favourites:

This is Art Is Trash. You see his stick figure impressions everywhere if you look hard enough: 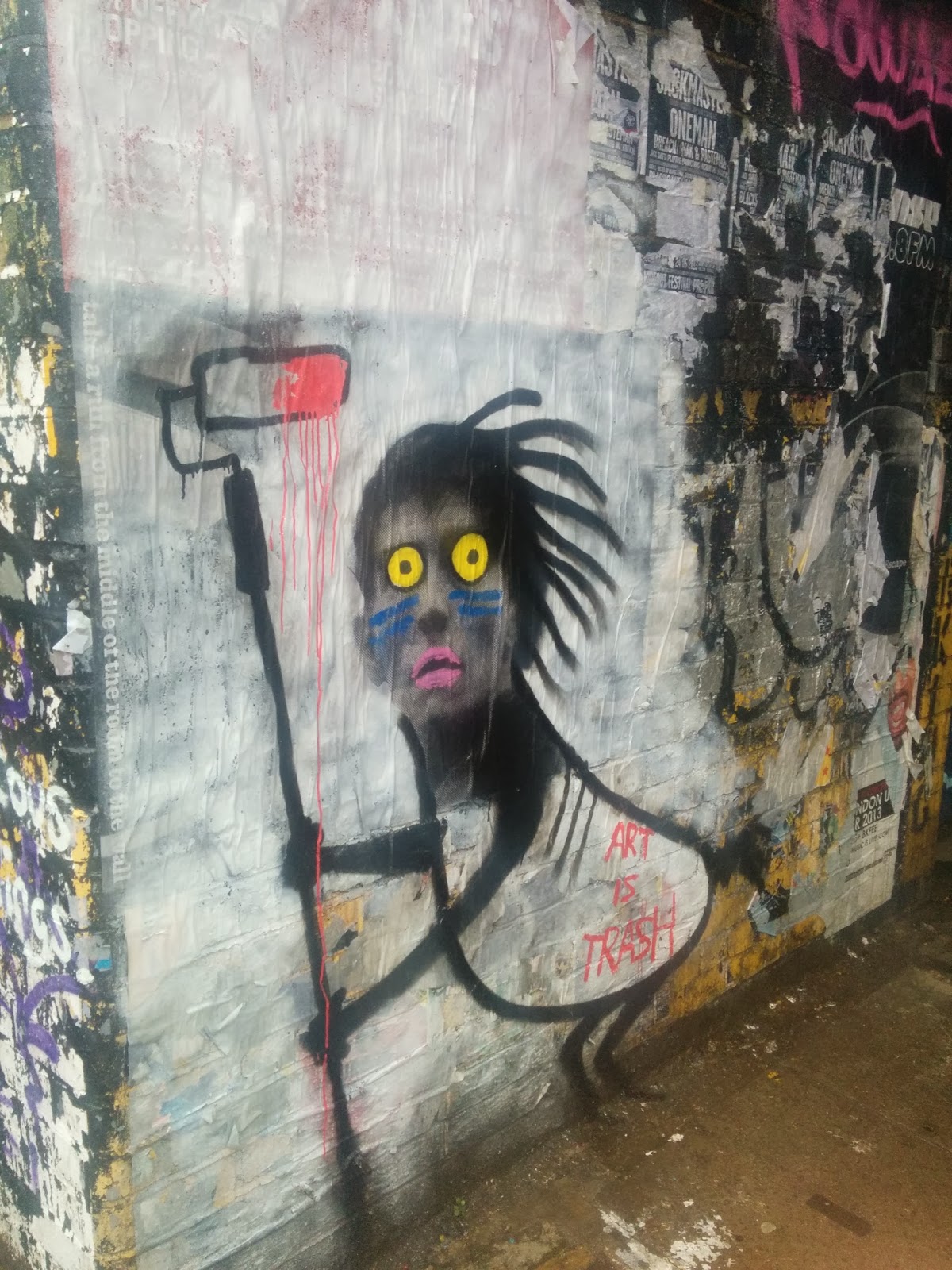 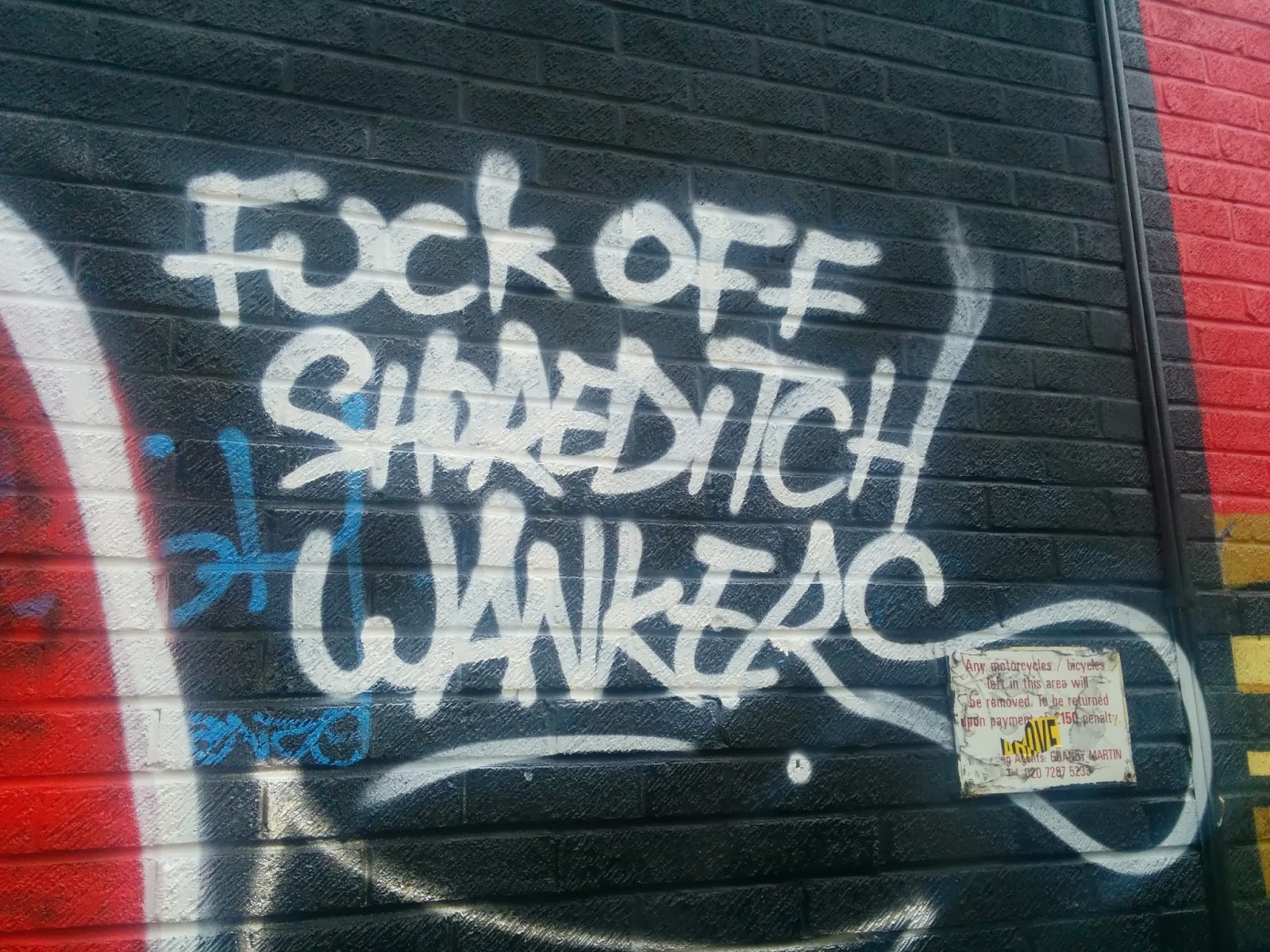 Not art.  To be fair, just expression. To whoever wrote that: these people are way too cool for me, too, so I hear ya. 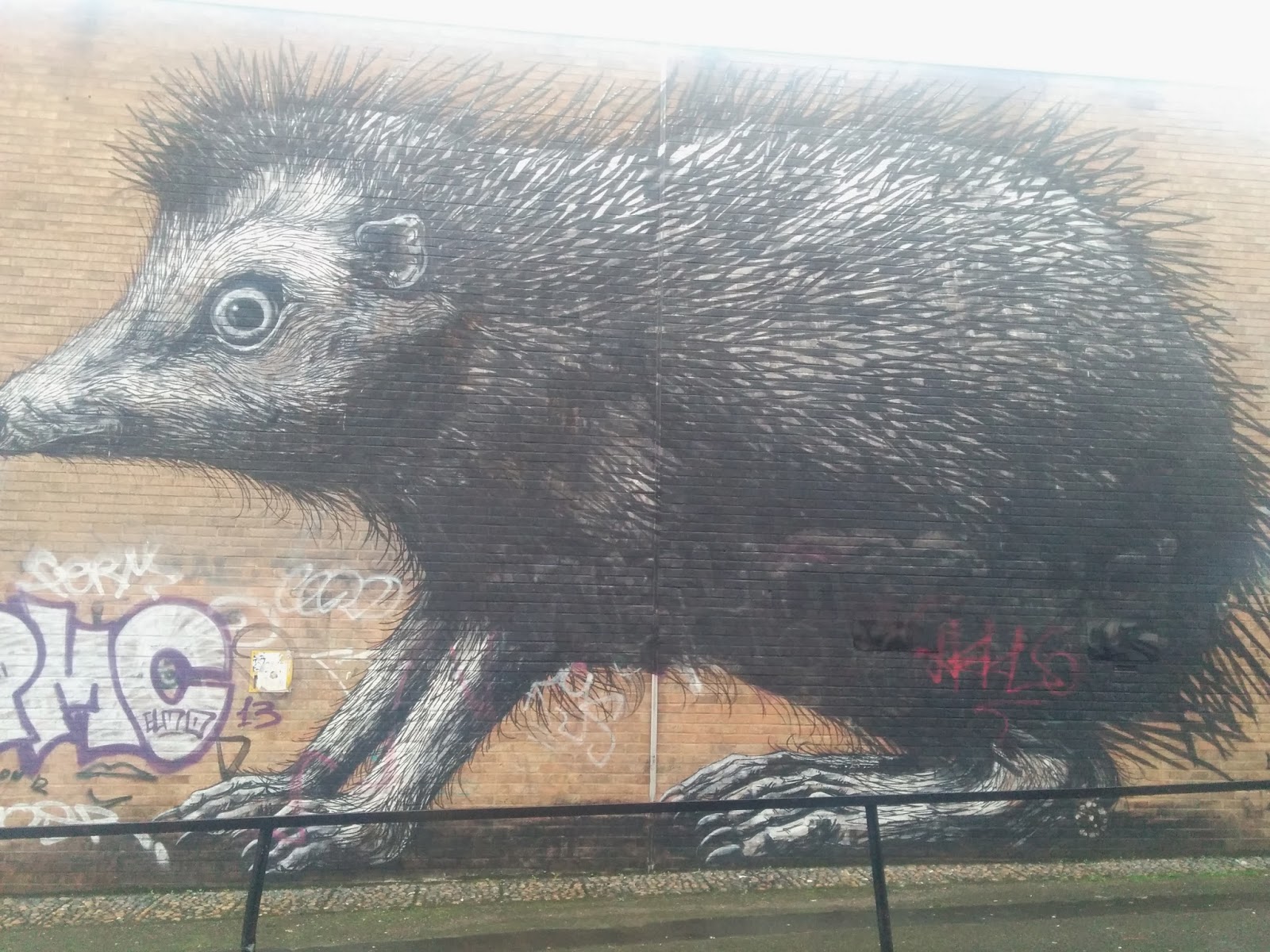 This dude is phenomenal. Goes by the name Roa, from Belgium. He painted this in 8 hours, undetected. That in itself is a special talent. He used the brickwork to create a 3D-type texture, and the piece literally pounces at you, as it takes up an entire wall of a building. 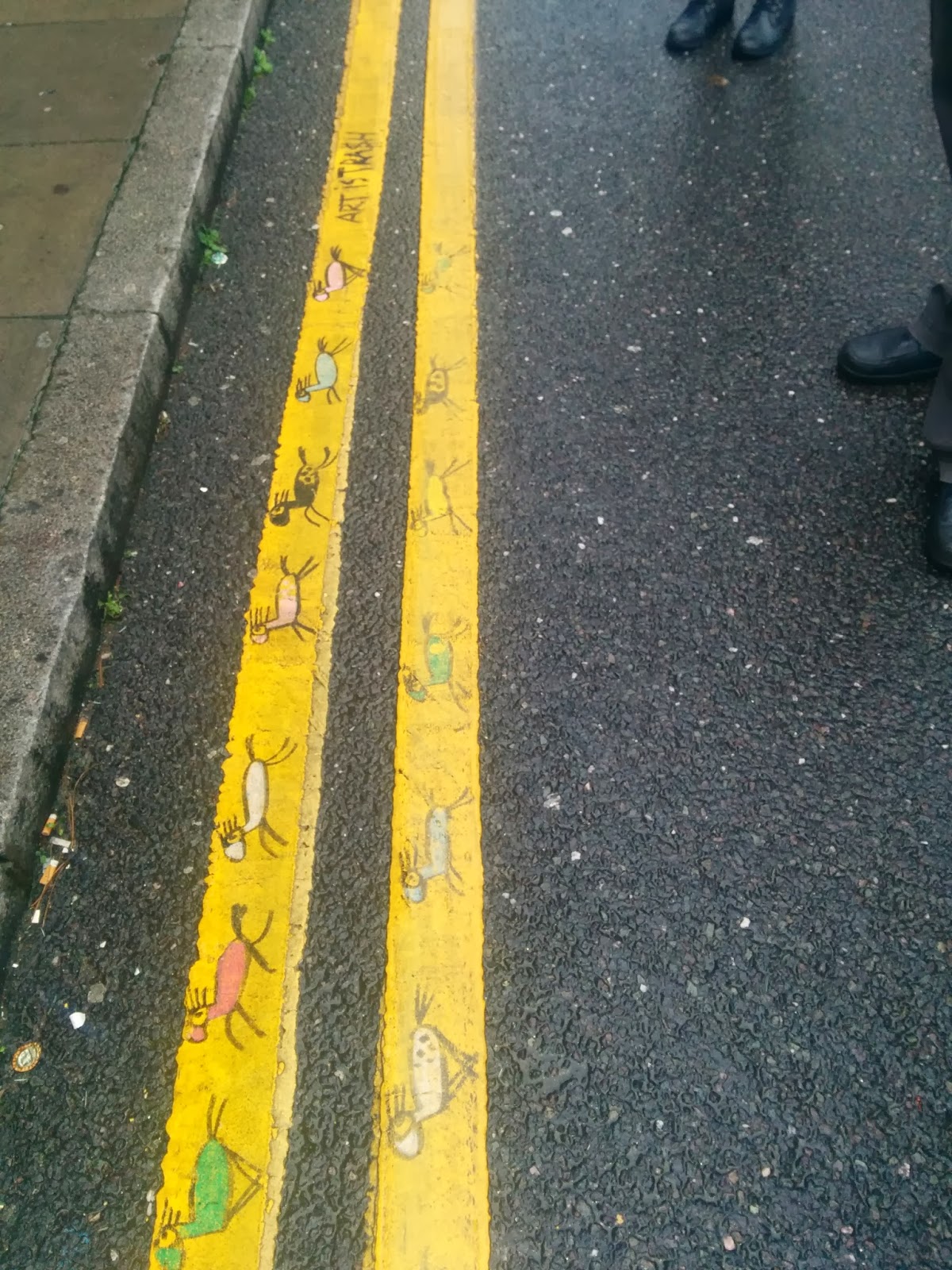 The street art world changes so frequently, day to day there is new art sprayed or painted over other art. Art Is Trash only did this a week ago apparently, using the conformity (you like that?) of the two solid yellow lines as his canvas of choice. 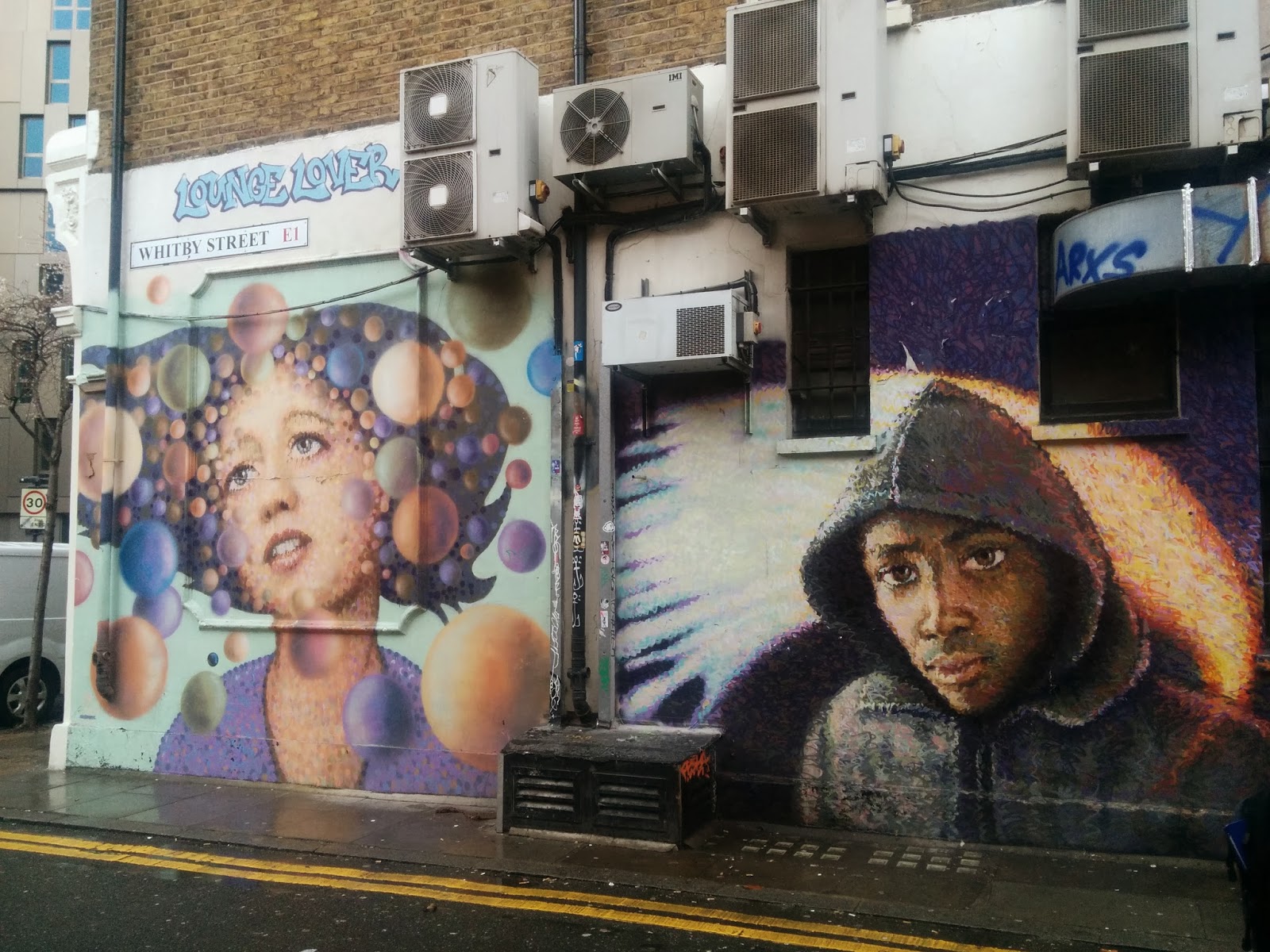 This is Jimmy C. A guy whose work is worthy of an exhibition in a gallery. He did this piece after the London Riots in 2010, and as such acopyn acclaimed and respected figure of this community, his piece will remain untouched or untagged over. (Emerging street artists tend to know that there is a level of respect needed, where tagging over a famous, established guy's work is a no no).

What's incredible is how the piece is so detailed and together from across the road. 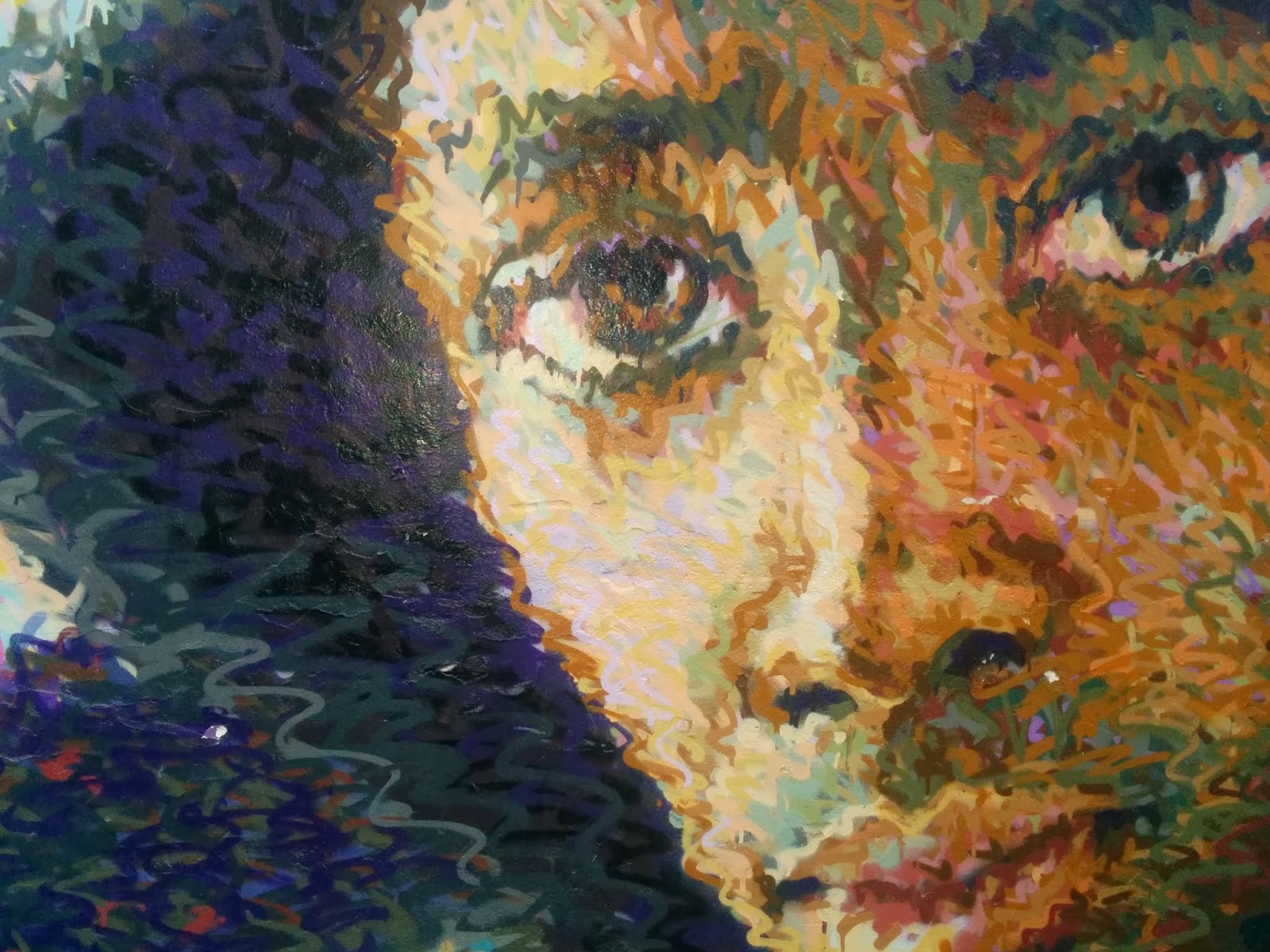 Then on close up, you see how he's composed this using millions of little squiggles. How he did that from close up is anyone's guess. 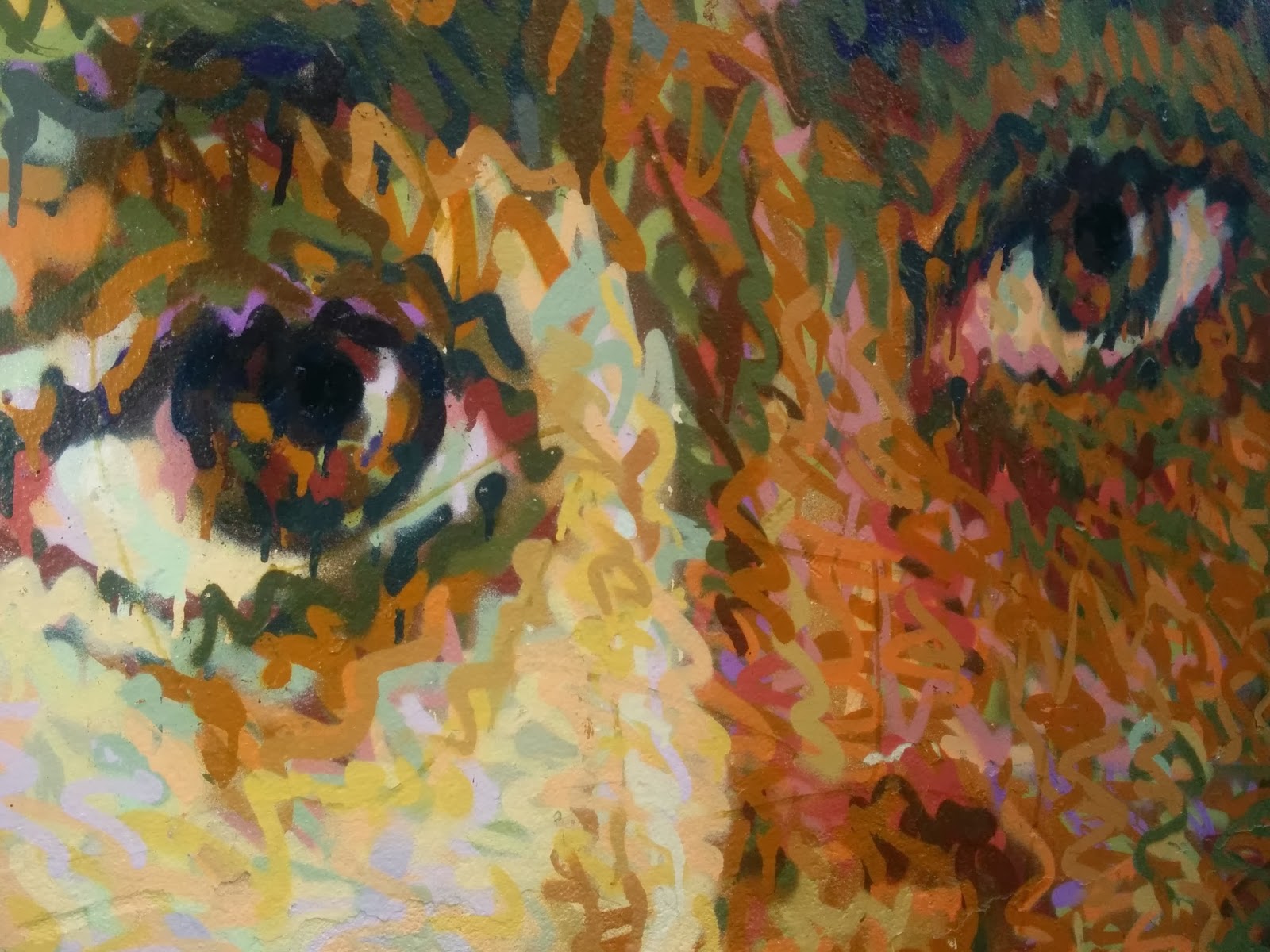 It's all very clever, isn't it? 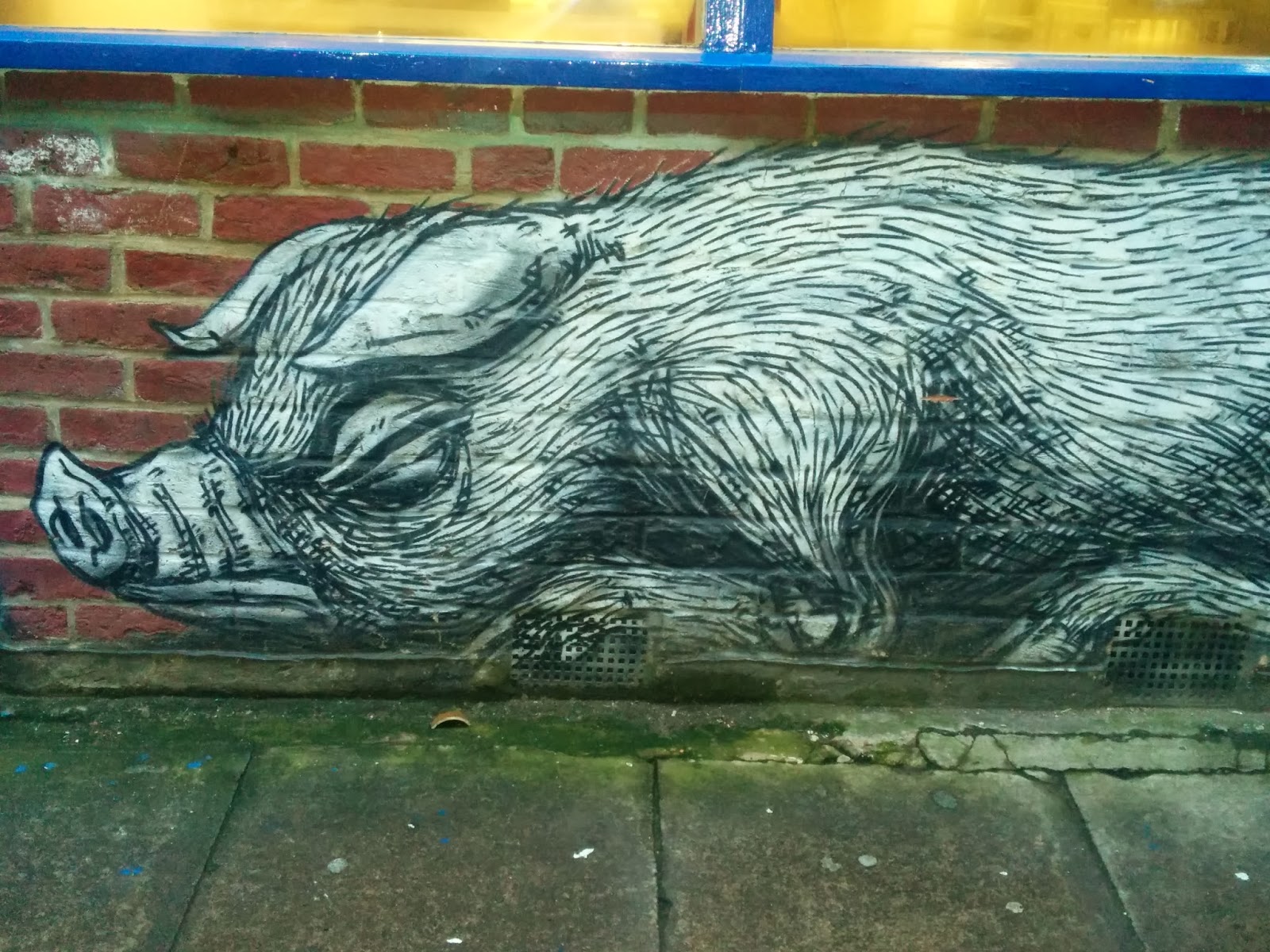 Another Roa, this one below a shop window on Bacon Street. Irony not lost there then. 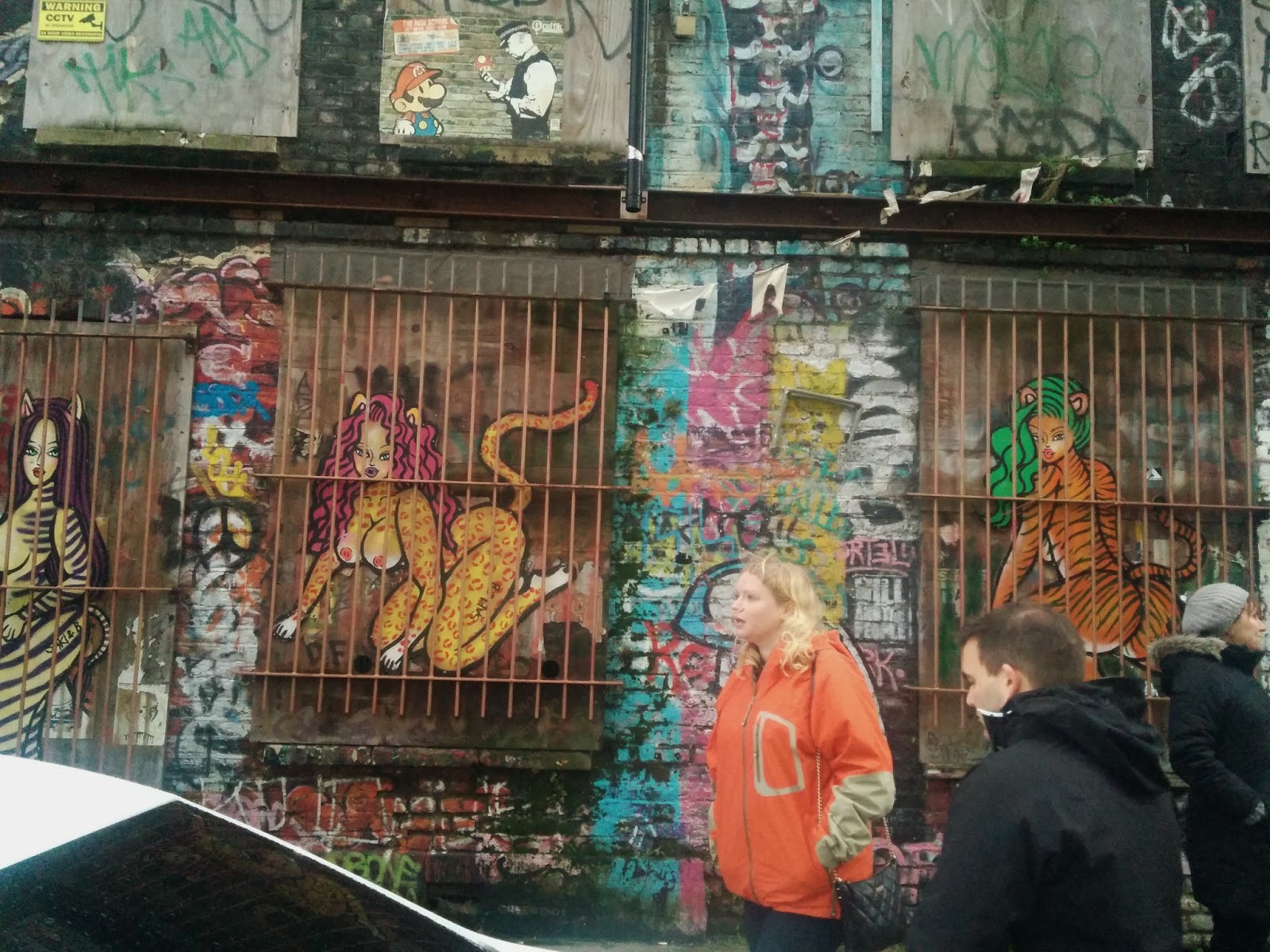 These three creature-females are known as Saki's Bitches. 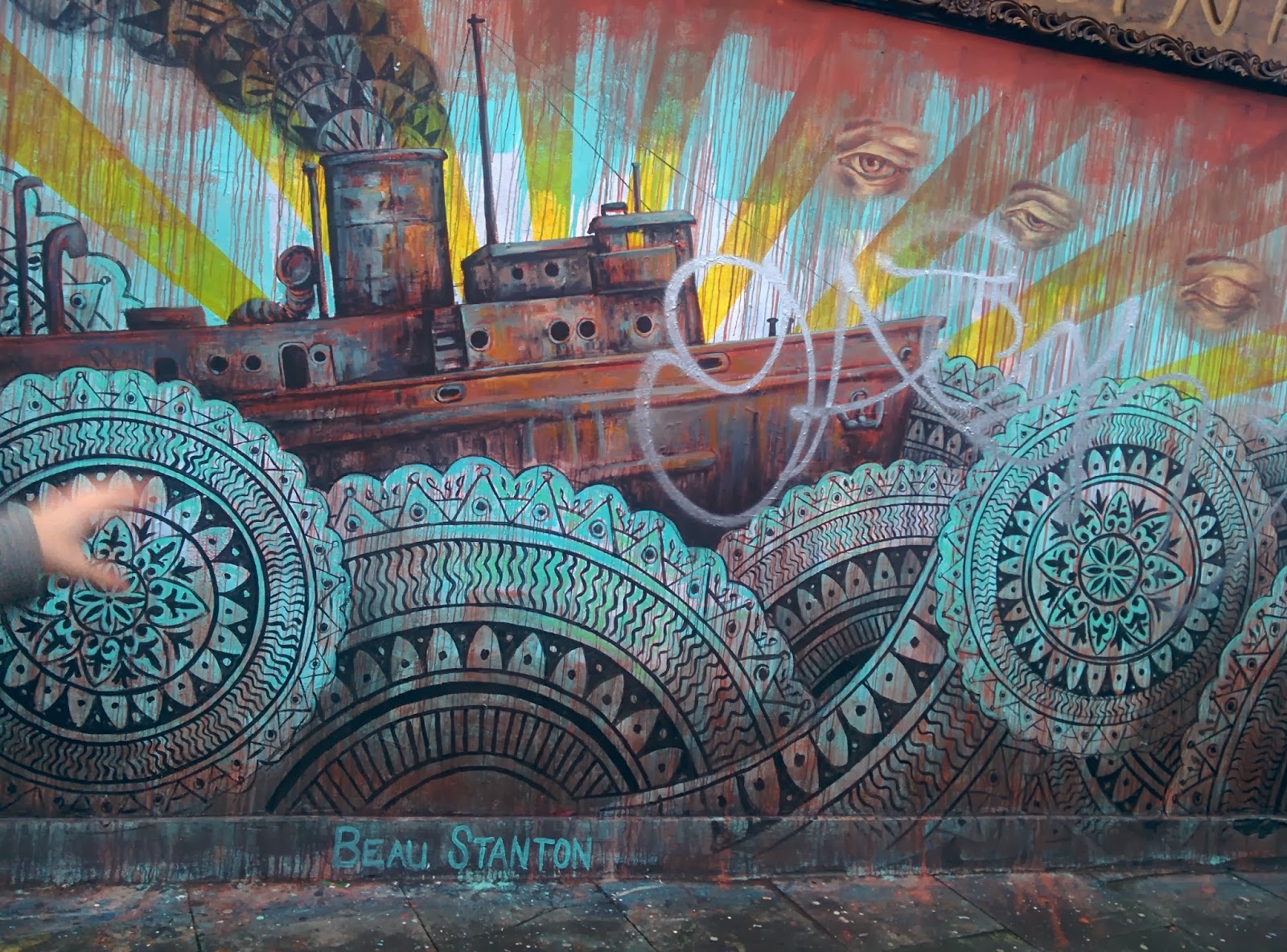 Another amazing mural, brimming with talent. Beau Stanton is the artist, from San Francisco. Love how he makes the sea look a little oriental, mixed in with the more modern stuff. 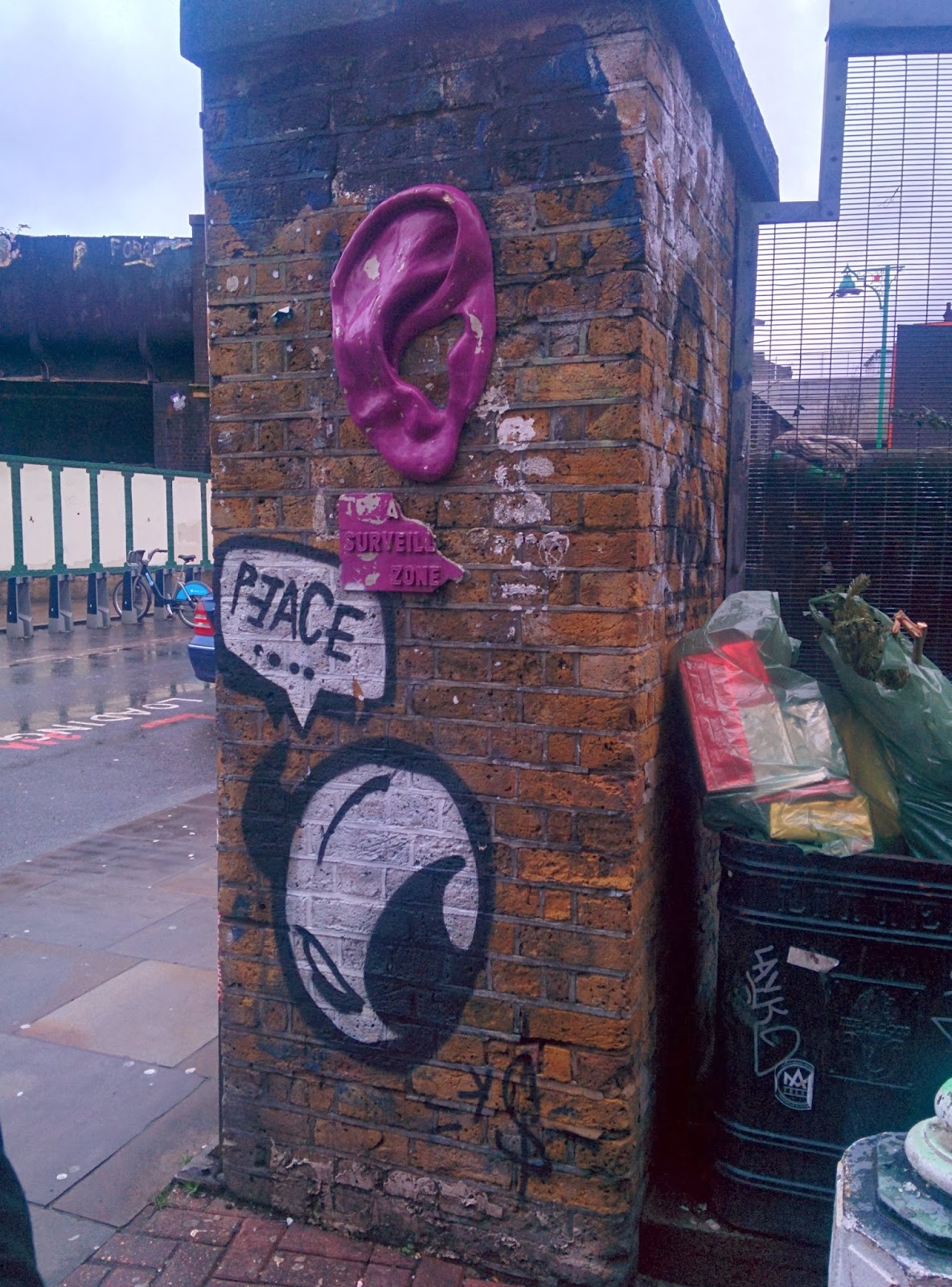 Since the whole 'the NSA is spying on you' thing exploded, these ear sculptures and plaques stating "Open surveillance zone" have been popping up, by D*Face. 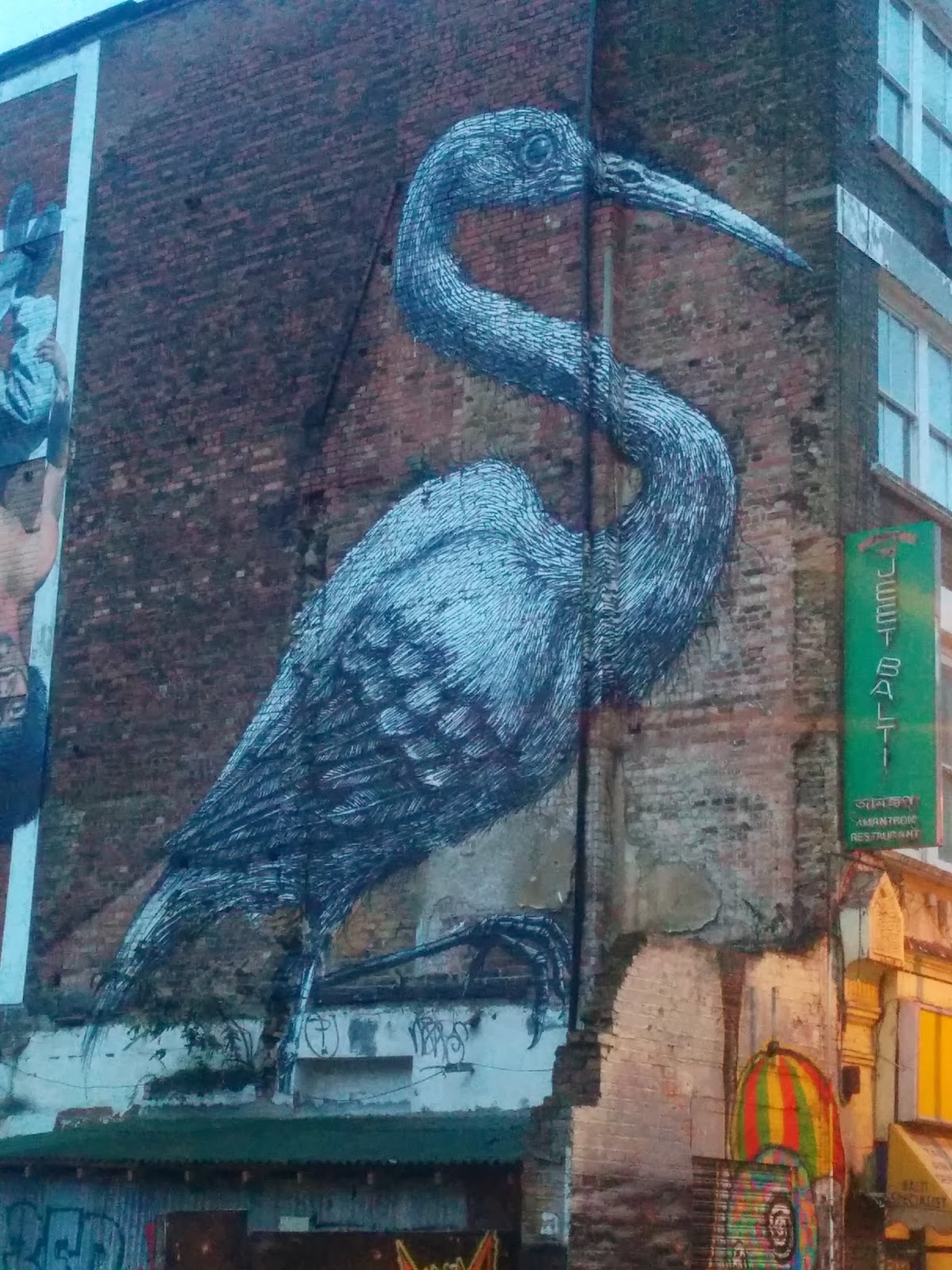 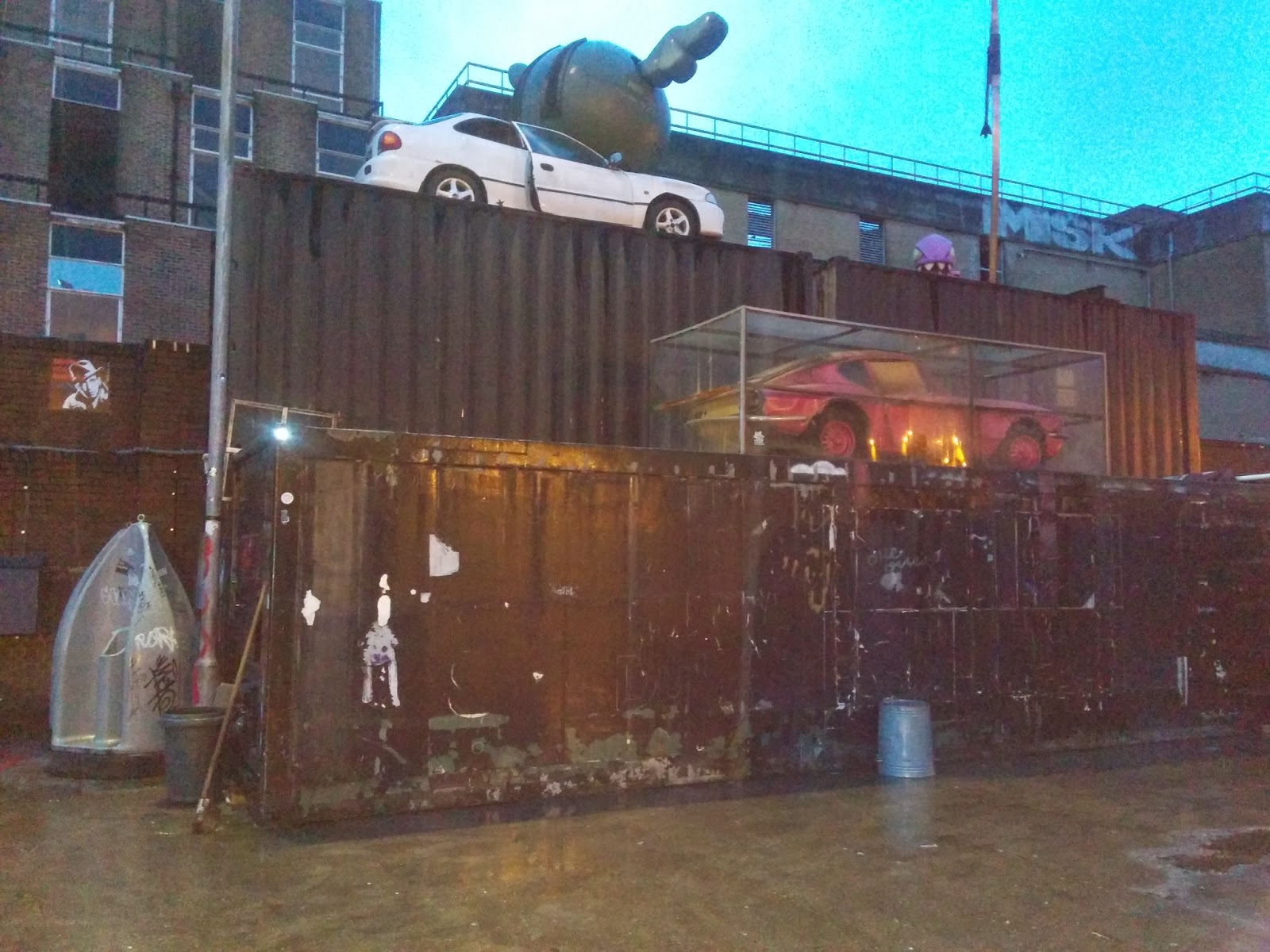 This doesn't look like much - a few scrap cars and an external urinal on the edge of a parking lot.
It is the parking lot of the Truman Brewery, in the middle of Shoreditch, where people convene to drink and eat and cars convene...to park.

In that perspex box you'll a spraypainted pink car. That is the last public Banksy in London. All the other Banksy's are either bought up for thousands and thousands and shielded behind glass or guarded, or otherwise stolen.

Banksy has become so famous - too famous - that he can't even do street art anymore without it being taken. He has commercialised and made so much from his art, which I personally don't think is a bad thing. But it's quite ironic that this is the last public piece in the city, now sitting next to some urinals in a parking lot.

Above it is another car, squashed by a giant head sculpture with wings coming off it. That is a famous piece by a famous street artist D*Face, whose tag/avatar is a head with wings (as seen in the photo above with the ear).

Then behind that - you'll see a pink thing. The head of a pink thing anyway. That is the Credit Crunch Monster. Erected near the City-side of London when the recession began, as a big Fuck You to all the bankers that work there.
Has since been moved to this parking lot, also as protection so that it isn't stolen/damaged.

Who would've known, or even noticed, had we not had our guide with us? 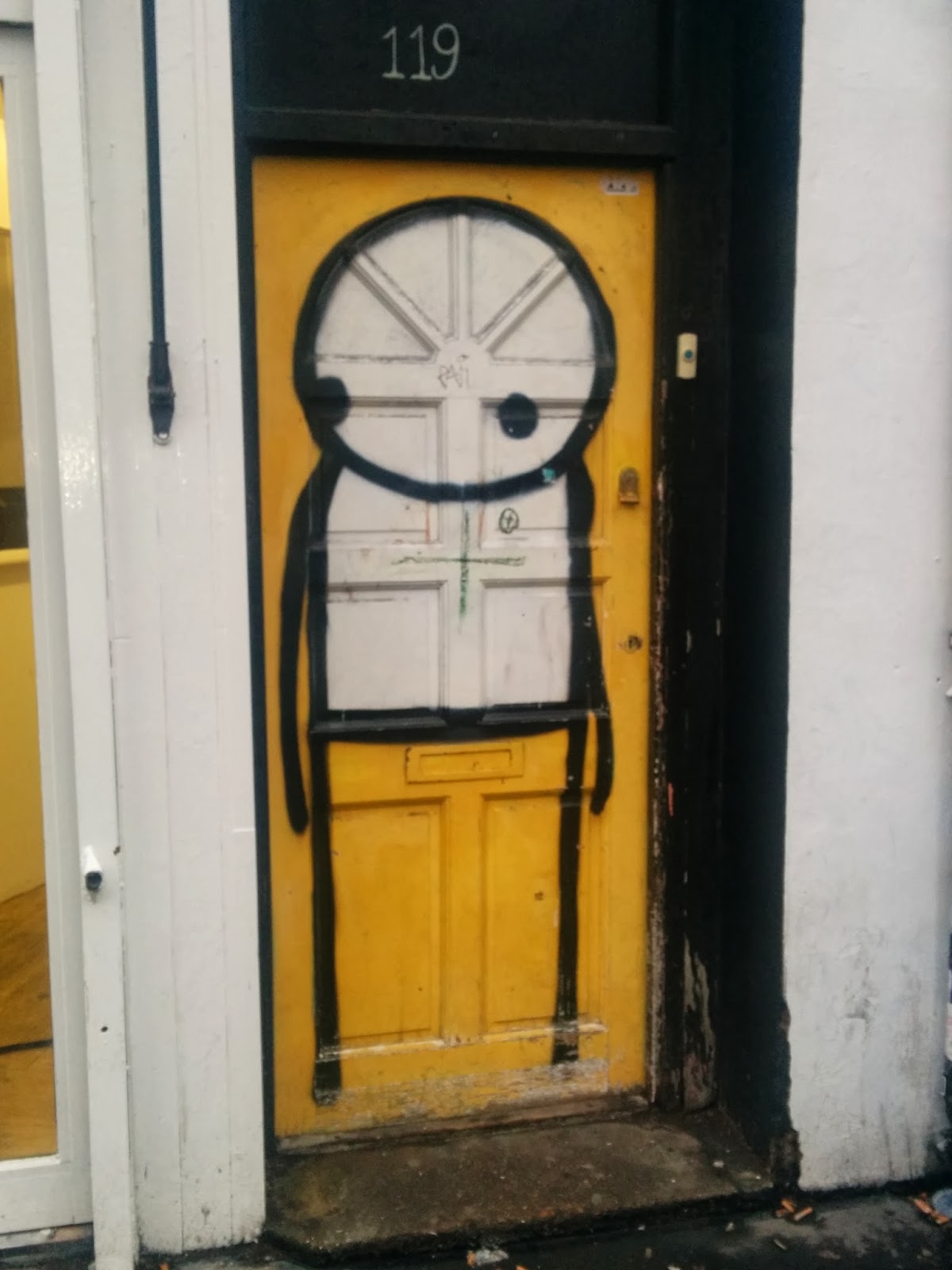 Stik, who is pretty well known for his simple yet bolshy stick men, did this guy's door one night.
Imagine your surprise if you lived here. Opened your door one morning to find it had been Stik'ed.

You could sell your door on eBay for thousands. Instead, the nice man who lives here has left his door up and lets everyone Instagram the fuck out of it. 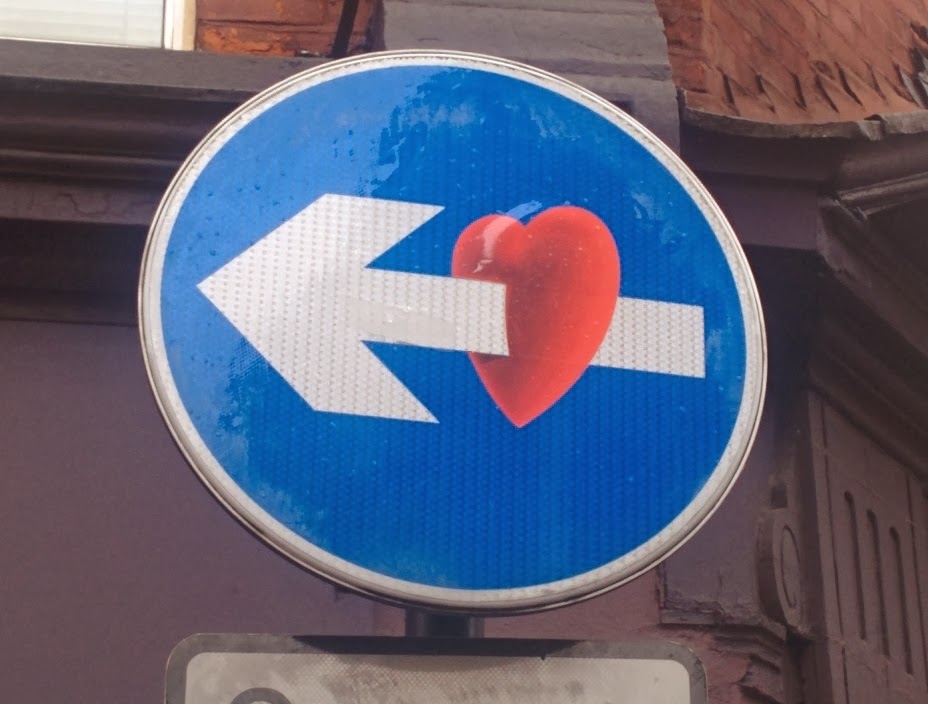 Street Art also pertains to signs. I love this. 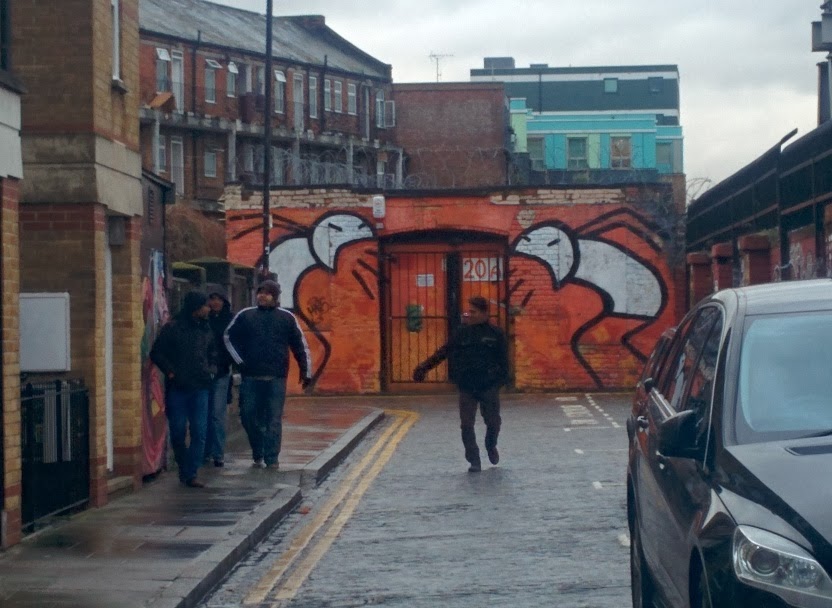 Another famous Stik. Juxtaposed nicely, I thought, with a gang of guys walking up the road towards us. Stik is a frustrated dude, so this is apparently a seminal piece that shows his anger with the state of the world. 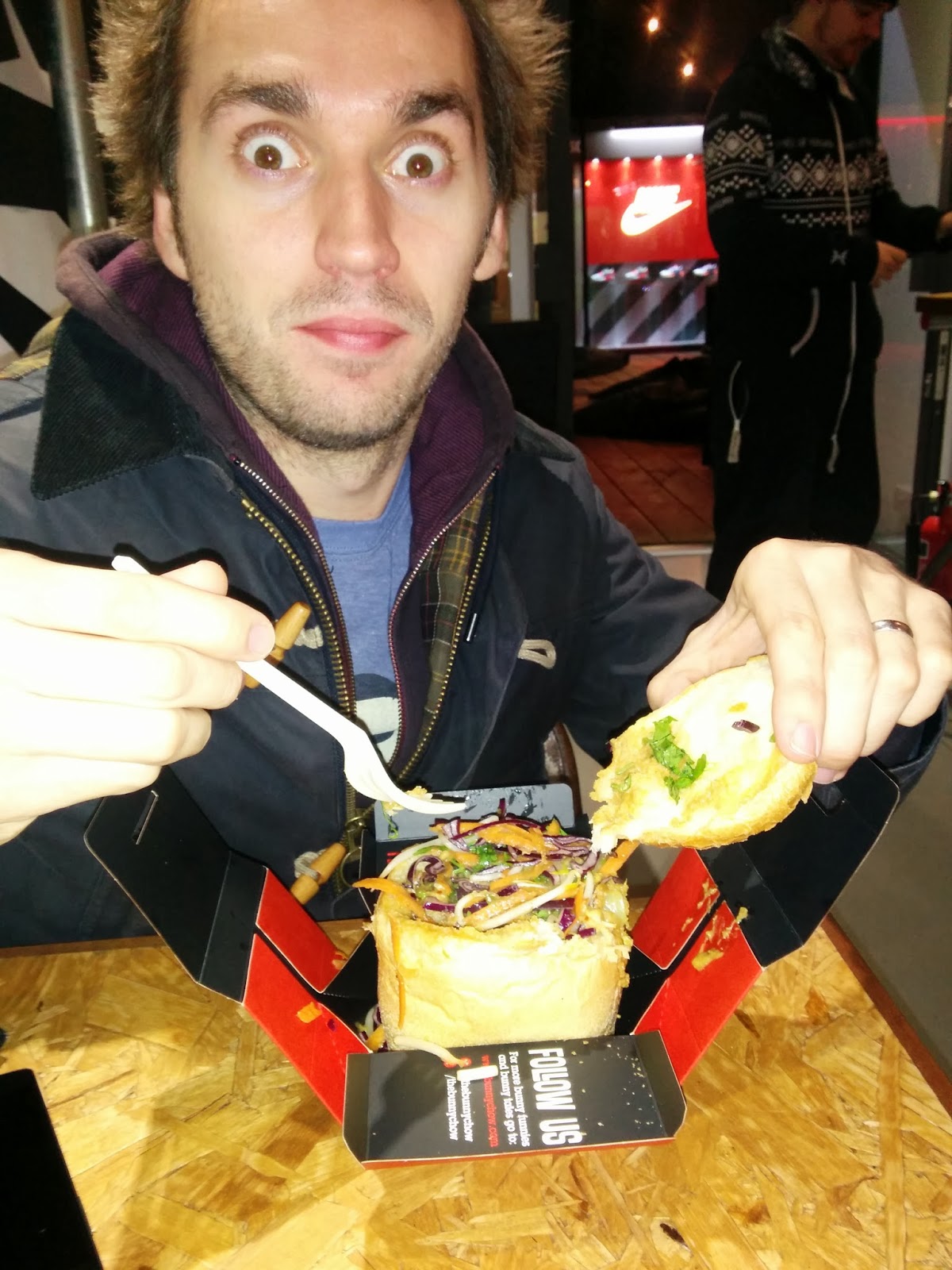 After all of that, and after loitering around the curry-staurated streets of Brick Lane (yum), we headed to a little pop-up that was doing South African Bunny Chow.

This is the Brit. About to devour his first Bunny Chow. On a rainy, cold January night in London. 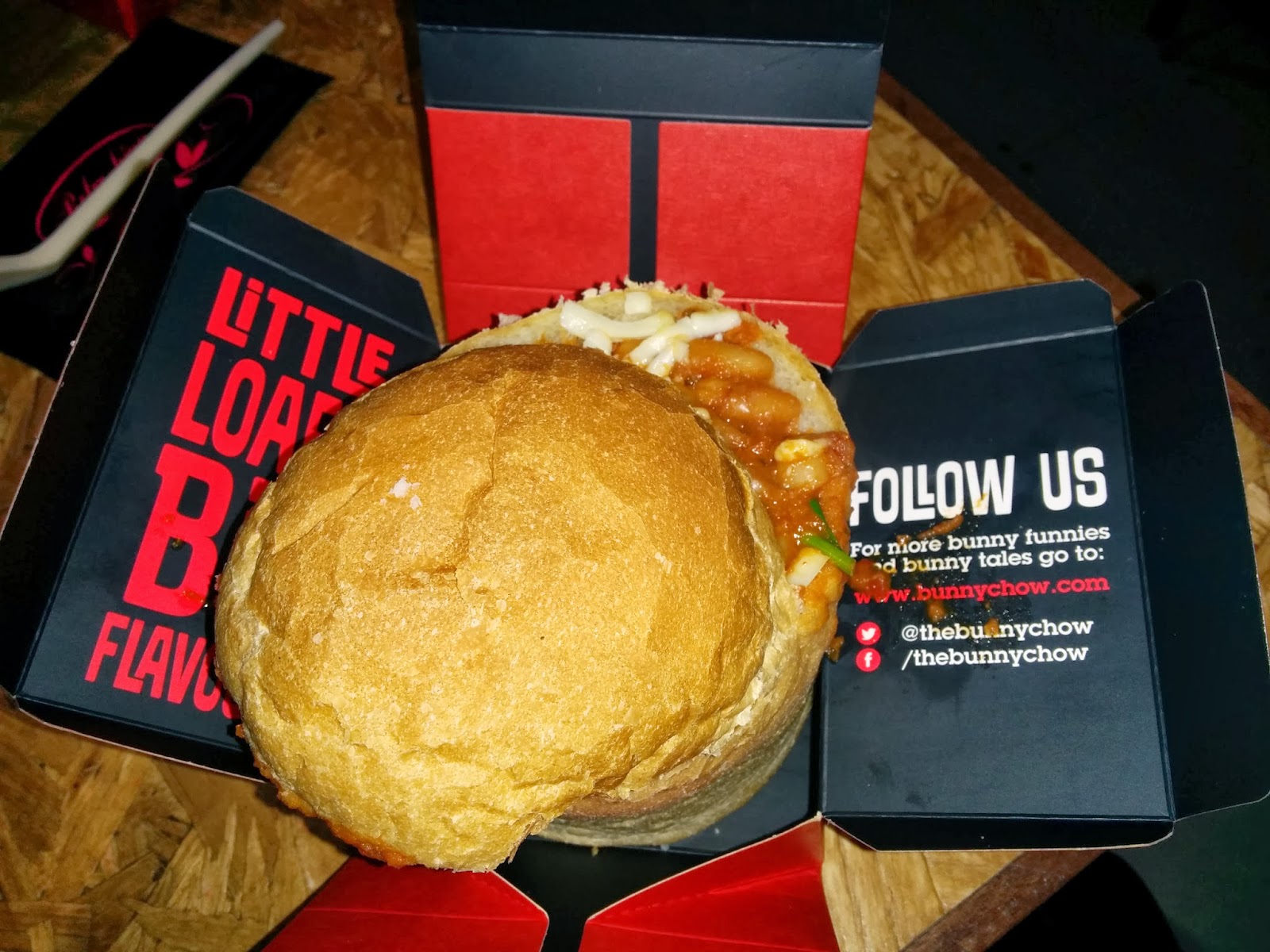 It was delicious, I'll give it that much. The last one of these I had was years ago on Durban beachfront from a hole in the wall after a massive night at the Durban July.

This one was decidedly more glamorous and hip. Also, it came from a pop-up, which is basically what Shoreditch is made up of. Pop-ups, street art and very, very cool kids.

Dang I miss London now. Even the cold, wet and dark of Jan and Feb that I came to despise I even seem to miss.

Glad to see things are going well for you...