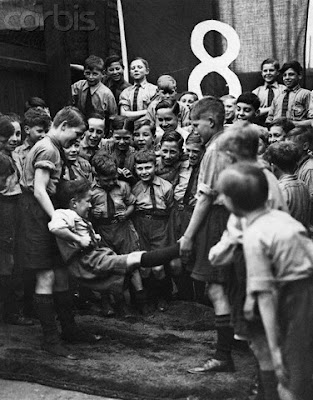 The result is the same. Drunk people, in a house, most know each other. The journey is slightly different though.

The Fridge
The conventional receptacle for keeping beer cold. So long as there aren’t 8000 cans of sauce in there already.

Twice now I’ve been to a house party where someone will shout, “Sorry bruv, you’re going to ‘ave to put them in the fridge outside.”

People have fridges outside?
Ah. When you run out of fridge space in a British home, just leave shit in the garden.

Walk into the garden of any house party in Britain, and you’ll find full cans of beer floating in the flower beds.

When it’s pushing two degrees outside, where’s a better place to put your broski’s brewskis?

Even in a South African winter, you won’t really have the luxury of storing your beer outside. For two reasons: 1) it’s not that crazy frosty this-beer-is-simply-delicious cold; and 2) it’ll get nicked.

The Bumps
Yeah, I’ve never heard about this either. Apparently it’s meant for kids on their birthdays, and should stop at around age twelve. Predictably it doesn't, like how I saw a dude turn 30 and get it this weekend. So it also applies to adult juveniles after the ‘Buca has come out.

(More on The Buca below).

Someone calls The Bumps. It’s this big thing, whereby those involved inflicting The Bumps get into stealth mode so that the victim knows not what is about to happen.
Depending on how old the victim is turning, the Bumps inflictors throw him up in the air that many times.

But then, there’s always the hazard factor of English rain, slipping hands, or the falling victim who’ll bounce off his coccyx, and chunder everywhere. Presumably.

(“So I turned 50 this year and my mates administered The Bumps to me, and one fell backwards into a bath tub of Stella and lost a testicle.”)

Standing Competitions
We held a little Christmas party and had a huge problem last year. We may live in a house, with fully-functional lounge and kitchen areas, however, even then, one might find that one won’t get to sit once the whole night.

One might find the only buttocks-surface cohesion they have is when they make contact with a toilet seat.
I imagine some people go to the toilet for that very reason, just to fucking sit.

I’m a person that needs to sit when I’m boozing. Some people can stand all night, huddled at the bar counter. Some don’t even lean on a bar counter. Not me. I find this ridiculously odd. I need to sit or else I hate my life. I will start teetering towards other people’s bottoms and nudge my way onto their seat. Unless I’m in a night club, my ass needs a break.

Enter the London house party. One needs to stake out a seat on arrival with almost pounce-like prowess. If you’re too late, all is not lost; it’s quite normal to sit on the floor.
People will peg your hand to the floor with a stiletto heel as they walk past, but no real bother – you’re still sitting.

I sat on my coffee table and on the floor next to it during our house party. We also sat all over the kitchen counters.

In South Africa, you’ll almost always get a chair.

The Buca
When I did shots at my mates house parties at home, it was usually Jaegermeister. Pre-28, I might've dabbled with a bit of tequila. When I was 14, I did Apple Sourz. (Gak, is that bile?)

Here. The standard shot of choice is Sambuca. Or simply put, ‘Buca. It’s colourless, unlike ours that comes in all sorts of nuclear-reactive hues, but by no means less lethal.

The Brit calls ‘Buca’ - or tries to, then I stop him – most Saturdays. See, when I was 17, I drank my body weight in Blue Sambuca one night when some friends and I bunked out of school.
I had blue Sambuca stains – from the incessant vomit – around my mouth for three days. It was messy. And sadly unforgettable.

This is what the Brit and I are on. Britain, like Saffaland, tries to embrace January as the month of Damage Reversal. We’re not drinking until we go to Vietnam at the end of the month.

Few reasons:
1) The cocktails will taste even better on the beach in Vietnam
2) My migraines
3) Our waistlines
4) Saving for houses and holidays

We drank non-alcoholic Becks beer on Saturday. You know, to bridge the psychological divide. We were the subject of much ridicule.

But then I remembered what everyone was talking about on Saturday and they don't. Win.
Posted by Peas on Toast at 4:01 pm

A lot of people wants to have the best place where they could stay when they travel and here's the perfect place for you to stay when you travel in Argentina.

1) I havent been to a house party since in years, and the last one was lame.
2) Standing also ruins my night
3) I seriously had another dream the other night that featured you in it. I dont remember much of it though, but we should stop meeting like that please. It confuses my early morning mental state (Wait? Peas? My dream? Im crazy) :P

Thanks cathyarv - I've been to Argentina. Any suggestions for Vietnam or are you a proper spambot?

PS: Standing ruins my life. I want a fold up chair I can take with me everywhere! x

Hahaha! You were judt round, not green and pea like - or very round either :P

One of those small triangle fold upable chairs would even do!!!

NON - ALCOHOLIC BECKS!! now that raised me from a year long slumber....