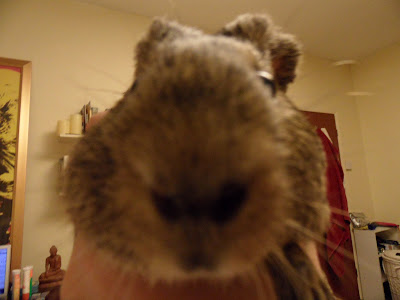 How to get people to talk on public transport

Suddenly everyone wants to know.
Hold a brown box with "PETS IN TRANSIT" emblazoned across it, on a crowded train. I got asked several times what was in my box.

One lady then took the liberty of telling me she owns an elephant sanctuary in Thailand and showed me an entire album of these elephants on her iPhone.

Like I cared. I cared that one of my guinea pigs had buns in the oven and I was about to give it up for adoption.

How to get a second opinion
The Brit drove me to the UK's largest pet store in the UK.
Think IKEA for animals. Anything you ever dreamed of is housed in this warehouse. The full spectrum of pets, from corn snakes to fire fish, to poisonous tree frogs (85 pounds for one!), to chinchillas, the whole bang shoot and more.

If your pets are your children and you want any snack, treat, house, food, go to Pets At Home in New Malden. Fuck me. I haemorrhaged money last night, I tell you what.

I bought an alfalfa and honey hidey house that's edible. A gnawable house.

Dwayne was taken away from me and put in adoption
For 10 minutes.

The store assistant did the 'penis test' on Dwayne. And nothing.
And said "Yeah...she looks like he's been up to somefing. She's up the duff mate."

I said my teary goodbyes and asked about how to console a traumatised Wayne.

Then she did the penis test again. And something popped out.

Peas: Is that a guinea pig erection??

Peas: So Dwayne's a boy?

"Well if you ask me, there isn't a shadow of a doubt innit."

Peas: Oh my god. EVERYONE! I CAN KEEP MY DWAYNE!

[By now the Brit is hiding behind the bird cages].

Peas:...hold the phone, then why is Dwayne pregnant?

I was so excited, even the Brit was excited. We ran around the store and bought treats, edible houses, wooden carrots and a new water bottle, preparing for the mother of all cage pimp ups.

We are such losers.

But I am so relieved I could literally run around the streets in the nick.
Posted by Peas on Toast at 10:05 am

I am sure Wayne was very relieved to see his mate! They do make a cute couple!

Just out of interest . . . how far is this haven of pet accessories from London?

Brilliant. So you have two gay guineapigs right?
Or was there no humping in the end? Just gas?

Wired Mom - so happy I didn't have to separate them! Man the STRESS OF GENITALIA I TELL YOU!

The haven is accessible by train, it's just south of Raynes Park, so about 20 minutes by train from Clapham Junction in total. :)

Roxy - gay as the sun I tell you. They are completely and utterly camp. Flaming queens the both of them! :)

Those are seriously cute guinea pigs! I was at that Pets at Home the other day. I ventured out of Siberia a.k.a. Germany to go visit my brother. No trip to my bro is complete without a visit to PatH. My cat's most favourite toys come from there. I'm always scared the airport sniffer dogs will sniff the toys out of my hand luggage coz they are stuffed with cat herbs. I'm glad you got to keep both Wayne and Dwayne.

They are just too bloody cute for words!

Yay, Dwayne and Wayne are still together :)