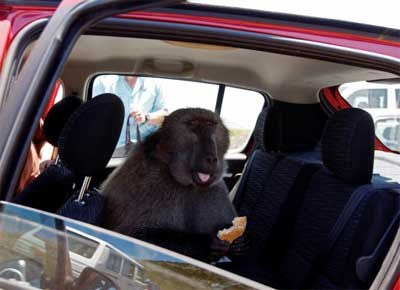 A few of my work friends are coming to my wedding, which I am extremely excited about.
Firstly, it's pretty cool that they're coming all the way, and secondly, they get to experience a bit of the South African vibe, vaab, for themselves.

I really think they're going to love it, as they've never been to the country, and they're all doing holidays on the back of our nuptials.

One guy I work with has been to Cape Town before, and had this story to tell when someone asked whether they should go to Cape Point on one of their days.

Dutch friend: "Sho what should I shee in Cape Town?"

Stoic Pom: "Definitely go to Cape Point. Although, be warned. There are a lot of..masturbating baboons in that part of the world."

Stoic Pom: [Sighs. Pulls back chair.] "It was a few years ago. And basically, we hired a Land Rover to drive around the peninsulah." [Not a Brit thing to do at all.]

"Anyway, we arrived thah, and after a monstrous hike, came back to find that three of the bastards were literally sat on the back seat literally eating our picnic lunch. [Yip, this happens to most people.]

"Except we didn't see that one baboon stayed thah, basically eating a new tube of Pringles, which I only saw once I was in the car and checked my rearview ["rahview"] mirror.["mirrah."]

"As one can imagine, I jumped out of the car, [lowers voice] rather alarmed. [Eyes wide, face straight.]

"He then proceeded to shit everywhah. And I mean literally everywhah. We half expected the car hire company to deduct thousands of pounds worth of damage from our credit cards. There was literally baboon shit all over the back seat.

"But after he had eaten all of our food, and shat everwhah, he wasn't quite done there either. Oh no. He was a cunning beast. He literally wanted to show that he was in control of this situation.

"He literally jumped off the back seat, and I could swear ["swah"] he had the most smug expression on his face, hopped onto the bonnet, and while we all watched, basically...just started tossing himself off. [Eyes wide, voice ending in a squeak.]

Dutch friend: "Are you sherioush?"

Stoic Pom: "I'd love to say I wasn't being serious. But the fact of the matter is, I have literally never been more serious about anything in my life."

"..and he looked so absolutely happy with himself as he literally wanked on our hire car. As if to say, "Show's not over yet, I'm not quite done here ["hyah."]

So I'm just saying, be very aware ["awah"]. Because all the photographs I took of the areah literally seemed to have a tossing off baboon in the corner of every one."

Literally the funniest story I've heard all week. You might've had to be thah, but be safe in the knowledge that I literally was.