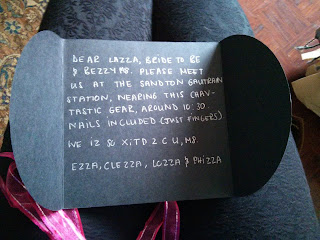 Can I just tell you how my bridesmaids pulled this one out of the bag?

I arrived home first, unpacked, spent some time with mum and had, like, half a kilo of biltong and a home-cooked meal.

Then mum presented me with this package that was delivered by The Dove's boyfriend; filled with props.
The note inside said something like, "Hi bezzy M8. We iz well x-itd 2 c u, but 1st u must dress up lyk a chav, wear it on the Gautrain & we wll meet u there."

It was raining in Joburg; I barely noticed.

I knew it. I knew they'd dress me up like a chav, I had a feeling this would happen. They hit the nail on the bladdy head, and now I had to wear it all on public transport. In South Africa. Where people used to know me. Fuck it was great.

Got on the train, butterflies and craziness, it was my actual HEN PARTY. I was about to see my best mates, and I was on my actual hen do. The craziness, the insanity, I was shaking.

I met Dove, Poen, E and Ant at the Gautrain station and amongst the excitement was whisked off to the Westcliff for some high tea at the Polo Lounge. All the while wearing my garb, you understand. I got to catch up with them over a few chocolate eclairs and cucumber sandwiches, and then Dove took me for a pedicure at the spa there. Amaaazeballs. I was just bitching about how 'London' my feet had got, and a pedicure, especially at the Westcliff, was literally, genius. 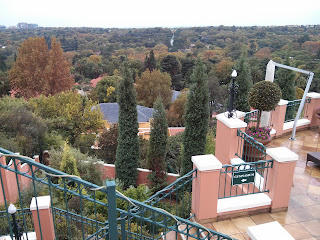 Was so nice to catch up with my bridesmaids before the big party. I was literally bouncing off the walls with excitement and disbelief that this was all actually happening.

Then the Dove pulled out something that nearly made my eyeballs bleed. "You didn't think you were just gonna get away with a hat and a scarf did you?"

A purple, velour, diamante tracksuit - embellished with fake leopard print on the cuffs and gold weaved rope in some areas. I have never seen something more hideous, and yet so beautiful at the same time, in my life.
Plus a shirt that they had made with 'I heart Essex' across the front of it. Amazing. They know me so well it's frightening.

A tot glass with a plastic penis in it was put around my neck, and we were off. E picked us up in her car, which she had put a large ribbon on front of the windscreen that said "Peas' Chav Chariot" in diamante. 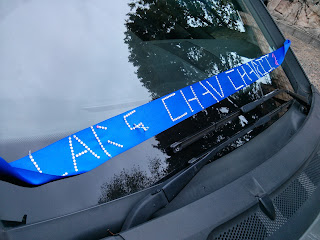 The details, people. My bridesmaids are details people.

They dropped me off to a bunch of my friends, also all dressed up like Brit Trash, at a place in Greenside - think it was called Mish Mash? Where they had decorated the entire venue, from floors to walls. Well, I just burst into tears. They had bought a man in - Melvin - who played the decks, had a travelling karaoke machine and a smoke machine. They had painted banners for the walls, like "My Big Fat Hen Party" and a mural of all the things I love (this is what made me cry.) Things like 'Hammond, Mazza Thatcher (genius), Diemersfontein Pinotage, Communist Buildings," (no jokes). 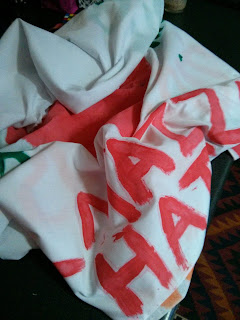 Plus made everyone CDs with my favourite karaoke choonz on it, with ribbon and a rubik's cube, the details were amazing. I was so overwhelmed and blown away.
They even bought in carpets and bean bags to jazz up the vibe. 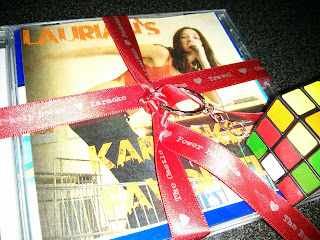 We played pass the parcel where I had to answer questions posed to my Brit, and some kind of plastic penis would come out of each layer. It's amazing what kind of paraphernalia people can make out of a plastic penis. We pinned the penis on the Brit - a huge cardboard cut out of him. The Dove said a speech that also made me cry.

And got verah verah drunk. The bridesmaids were proper troopers - running around with Jaegermeister, filling people's glasses with champagne, fuck me, I just felt so special. Crikey.

We sang karaoke and got motherless. Then when I thought we'd all wind down and eat a sandwich, a freaking stripper entered the scene.

I jest you not, I needed about 6 shots just to man up. The man had a ponytail and one large chest that he made me stroke. He was a gracious stripper though - telling me that he'd now put my hand 'there' and there. I did not see his willy, just his little pants. It was so funny, crisis.

Ended up passing out on a table with everyone and then bundles into a taxi at an ungodly hour. Bought the cardboard cut-out of the Brit with us. What a night. We all stayed at E's, and ate her out of house and home after raiding her fridge.

Just the most perfect hen's party. Blew any expectation I ever had. Fuck I love those girls. It was amazing to see my best mates, all in one room.

And still recovering, FYI.
Posted by Peas on Toast at 8:45 am

Where's a photo? Just dying to see the purple tracksuit!! LOL!
Your friends are special Peas. Glad you had a rip roaring time. :)

I wanna make looooovvveeeeee in this clubbbbbbbbbbbb. In my velour track suit. With my yellow wig. With pink curlers. And my burnt retinas.

I've just installed iStripper, and now I enjoy having the best virtual strippers on my desktop.