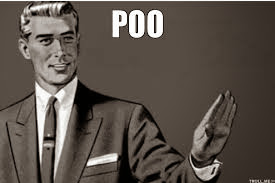 If you find toilet humour hilarious, dazzlingly fascinating or otherwise generally entertaining if it involves a story, then carry on reading. If you don't, then stop reading.

Peas: The one where that girl from your school did an exit shit on the driveway?

Tweedy: Well we were doing our GCSE's [final school exams for those not familiar with UK]. She was the school troublemaker.
She did something naughty in the exam and basically got expelled a day before we were due to leave school forever.

Tweedy: So instead of the exit with all her friends where she has her shirt signed by her classmates, she decided to stage her own... protest.

Tweedy: People got word that she was going to kick off, and soon a crowd had gathered outside the main building in the parking lot.

Peas: God I love this story.

Tweedy: She marched out, flipped the bird to the school building [that's a 'zap sign' for Saffas], lifted her skirt, hunched down, and curled one out in the driveway.

Tweedy: That aspect was impressive. I believe she shat on demand.

Peas: Interesting. How long did she take until someone stopped her? Like, did she lay the whole cable??

Tweedy: It took about 20 seconds in total. then she dropped her skirt and sauntered off.

Peas: So she quickly snapped one off. Oh my God.

Tweedy: There was a bit of speculation about whether it was a fox turd that had been there all along.
But then someone bravely held their hand over it and confirmed that it was "emitting heat." And thus was fresh.

Peas: This is killing me.

Tweedy: She exited the grounds and walked up to the train station, never to be seen again. Hence the debate over the origin of the faeces thereafter.

Peas: Yup, confirmed. Still the best real-life American Pie scenario I have ever heard of ever in my entire life ever.