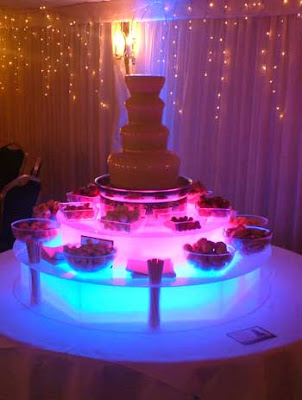 We've started packing up our house.

Looks like we'll be moving in about a month, and so instead of doing everything last minute, I decided to start clearing out stuff in the kitchen.

Frankly, if I had it my way, I'd just throw everything out and start again. Move with the absolute minimum and turf the rest away.

At the very least get rid of crap - specifically the Brit's if I'm being really honest here - that is taking up space and we just don't use.

There's an unopened box at the back of one of our kitchen cupboards. Unopened, tape fully intact. It's a fucking chocolate fountain.

One of those Christmas gifts you think are given as some sort of retributive revenge rather than anything else.
One of those, "Oh well look at that....a real chocolate fountain. Thank you ever so much....I'll use it at every dinner party I host..." presents.

And is it just me, or is it very The 80s? Right up there with prawn cocktail starters?

What use - if not maybe once ever  - is a bloody chocolate fountain? Maybe that one and only time for that book club fondue you had when you lived in a shared house and thought it would be the party trick for that evening.

There are some gifts you should never give people.  Gifts that you think, "well he has every other appliance I can think of - kettle, toaster, juicer...the last possible one on the list has got to be a chocolate fountain."

Never buy anyone these kind of gifts, I do not care if you think they're nice, I'm telling you right now they are not. The kind of gift where you're scraping the bottom of the white appliance barrel.

They clutter up the fucking cupboards, they're a complete waste of money and unless you're doing it to be ironic and/or a gag gift, (and in that case, it is funny, but for maybe 6 minutes), do not buy anyone the following unless they explicitly ask for it:

1) a didgeridoo
2) a multiple USB adapter, even if it's shaped like a cat
3) tot glass chess board
4) a Bible
5) a chocolate fountain

Well. It took me about five attempts to get it out of our house this weekend.
I took it out, and knew the Brit - although never having opened the box, forgetting it was there altogether -  would not be parting with his chocolate fountain maker easily.

So I knew it would be like a vending machine. It would take a few sways until the item dropped.
It might also mean some element of compromise was to be had - I'd have to forsake something. Throw something under the bus with the beastly chocolate fountain.

Peas: Started with the kitchen cupboards. Found your chocolate fountain. You don't want that do you?
[Fully expecting him to be adamant he did want it, but going for the kill anyway.]

Brit: [immediately on guard] It was a present!

Peas: You have never even opened the box. Since it was given to you in 2010.

Brit: I want to have people round for fondue.

Peas: We already have a fondue set.

Brit: And that was a present to you and you've never opened that box either.

Peas: Yes sure. If you feel really strongly about it, we can turf the fondue set. But bear in mind, the fondue set doesn't only do chocolate. You can melt anything in that thing. So already it's about 8000% more practical and useful.

Brit: I don't care. I want my chocolate fountain.

I now place the offending CF in the pile of other stuff I'm throwing out.

Peas: I know you love this thing, totally get that so fine, you can have it.

..."But just know that I am throwing away the scatter cushions on the sofa."

Brit: We need those.

Peas: Not all of them, only some of them.

Brit: So which ones are you throwing away?

Brit: But those are great.

Peas: Just kind of bored of them? Like I suspect you're bored of the appliance that we keep talking about?

Peas: Right, let's go to the charity shop. The pile is big enough.

Peas: It's the chocolate fountain.

Brit: But I said I do NOT want to throw it out.

Peas: I know, and you still don't have to.

Brit: But you're making me throw it out.

Peas: No. I'm merely suggesting it's a good idea.

"And I have another proposition."

Brit: OK, what's that then.

Brit: Yes. But still can't believe you're throwing away those cushions.

And that's how the chocolate fountain completely dominated our entire weekend.

You're way too upfront and honest about it. If it had been me, I'd have snuck it out of the house when he wasn't looking :-)

OH MY GOD! HOW can you throw away a perfectly good chocolate fountain?! I would LOVE to have a chocolate fountain and I don't CARE how 80's it is - *I'm* from the 80's. And I'm completely addicted to chocolate. And I have 4 kids, so it'd come in really useful for birthday parties.
Can't believe you chucked it out!

Nice chocolate fountain with a light

It is a very informative and useful post thanks it is good material to read this post increases my knowledge. Choc Fountain Hire