seeing through the darkness

I'm treading water. Sometimes a wave will knock me sideways and I splutter for air; but mostly it feels like the big waves, the tsunamis, have cleared for now.

Mum left a couple of weeks ago, and for about that long, it didn't feel like we sat down once. If we weren't juggling our baby while simultaneously preparing a meal for our toddler, or washing something while soothing cries, I was steralising bottles and washing my face at the same time.

It's been thoroughly mental.

A few things have dominoed over this time:
1) superhuman multi-tasking skills;
2) food poisoning (the Brit and I, three days after my mum left, rendering us half-dying and trying to do all the above while lying horizontal while emitting fluids from both ends);
3) the above knocking the wheels off breastfeeding completely, which threw me into what has now been diagnosed as post-natal depression;
4) establishing "systems" and routines to cope with everything.

The first point is something I'll pat myself and the Brit on the back for. Together we have managed to tumble our way through to Flo now being almost 8 weeks, where she is now crying less, sleeping a bit more, feeds stretching to almost 4 hourly. While tending to Sebastian's life, while the poor little chap battles through potty training, and therefore, peeing and poohing everywhere/on things.

We seem to mostly have a handle on this now. It's full-on-full-go all day, everyday, but by the end of of the day when they are both tucked in and sleeping, we can even enjoy a glass of wine and watch Stranger Things on Netflix like other normal people. I can brush my hair sometimes. I can wipe vomit from my trousers before I leave the house. I can leave the house!

Point 2. Don't get food poisoning when you have a newborn and a toddler. Honestly, besides thinking we were going to die - delirious, aching, vomiting, the whole hog - I had to get up to breastfeed Flo every three hours, while also checking on Seb who I hoped wasn't turning the gas on downstairs as we groaned and yacked in bed upstairs. To his credit, the little guy mostly got on with things, while running in every little while to say, "Mummy, Daddy poorly!" He knew. Bless him.

The problem with food poisoning, or any affliction, is that Florence had just started breastfeeding properly. Latching, drinking, not fussing and crying so much at every feed. This knocked it all out again, and I also got the beginnings of mastitis in my (then) engorged boob, so after a few bottle feeds I was back at square one all over again. She just doesn't like feeding from my boobs.

I was too tired to go down the feeding-her-with-a-tube thing again, so here we are: bottle feeding. I express about 5 times a day to at least give her breast milk for most of the day, while she is on formula at night.

I steralise about 8 000 bottles a day, and this is where the "system" comes in and my trying to be organised, amongst the chaos.

Not being able to breastfeed has hit me tremendously hard. After all the trying and succeeding in the beginning, only to fail now, it launched me into a depression I didn't think was possible. In my logical mind, I know my baby is happier and fuller on bottles, and we are generally less stressed. However I am so sad I can't breastfeed her. I never thought I'd feel so cut up about it, but here we are. She rejected me, not the other way around. So I should just go with it. But with all the pressure and subliminal messaging (and ease and convenience) of breastfeeding, I really feel like a sub-optimal mother.

I'm finally getting over myself, but it's taken some time. I have cried and cried and I feel down as fuck. Post Natal Depression, or PND, affects 1 in 10 in the UK. And apparently, I am now one of them. I am taking this on the chin and I'm going to sort it out. Starting Monday, depending on what the doctor prescribes me. Anxiety, constant worry, and just general sadness is what I have become; and I don't want to feel like this anymore.

That said, there are three small things I've discovered that can make and break a day when you have a new baby in the house. Three things that make the survival easier. Because that's what it is; it's survival, until you start to see that light at 12-15 weeks.

1) Go for a walk/leave the house once a day.
2) Make time for a bath/something just for you. It restores everything.
3) If you can get a nap, in between it all, you've bonused out.

An excellent day is if you can do all three in one day. Most days I get to do one or two of these things. A daytime nap is rare; sometimes I may steal 10 minutes because I am slumped on the couch with her on my chest and I fall asleep while sitting.

But one or two of these a day, is good innings. This is what I'm telling myself.

I have also made a new friend; someone I vaguely know through another friend - a Saffa who is also a mum. This is terribly exciting, and the familiarity of having someone around who is from the same background but who also lives in this town, is just wonderful.

I've also had a few friends come and visit, whisk me out for some wine, and helped me get an hour's break to put the world to rights.

I still feel anxiety at an unprecedented scale. But I can see a small twinkling of light at the end of what feels like a dark and unrelenting tunnel.

I love them so much. I look at my beautiful children and still cannot believe they're mine. Florence is smiling, and Sebastian is saying adorable things like "Ooh, I'm balarmed!" (Alarmed). He has also acclimatised to having a new little person in the house, and his tantrums are less.

It's going to be OK. 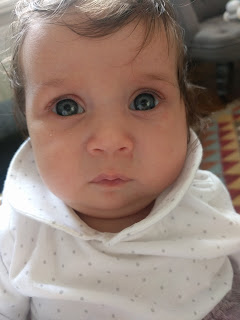 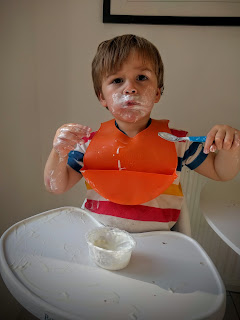 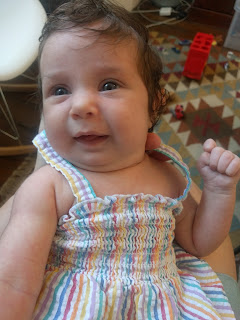 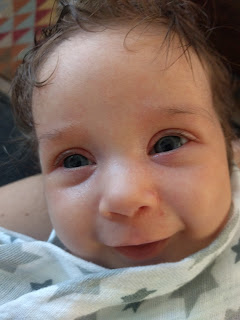 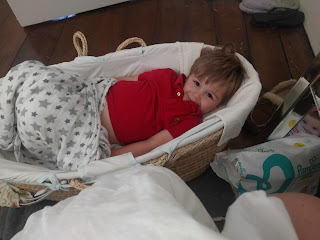 Sleeping in his sister's moses basket. Because he's a baby too.

Oh you brave, strong mama. I've been through PND and come out the other side. My only advice: take the medication. You will feel normal again! And well done for trying so hard to get breastfeeding right. Every drop of your milk counts, but it's not worth your mental health.

Peas - you are doing just great - it is NORMAL to be exhausted, overwhelmed, sleep deprived and feel like a failure - because that is what a baby does to us! i am no expert by any means as I am finding now that I have real anxiety and cant deal with every day things i used to deal with so well (having 2 jobs and a child and running a house at the same time adn dealing with 40 schoolkids for 10 days at a time). I feel finally beaten by the small anxieties but that could be becauseI was on terror alert last year for 2 months and it did NOT go down well... horrible.

You are dealing with loss and a toddler and a new baby and a new home and area and no immediate family support. I know about most of that (minus the new baby as I only have one) and sometimes we need to ask for help.

RE breastfeeding please please dont crucify yourself on this one - i had my little boy in Devon where they dont even give out milk at the hospital such is the policy towards breastfeeding!! I was "lucky" in that i had to spend 5 days in hospital when i had him so was given full support to BF at home and support at a baby centre (which no longer exists due to funding cuts) BUT what i will say is please new mums stop beating yourself up that you are not the perfect mother if you dont BF!! my husbands best friend is an excellent GP and always says as long as they have breast milk in some form for the first 3 months of their life then their immunity system will be very strong for at least the first year of their life (ie they wont catch colds etc) but the benefits after that are minimal - so expressing milk is still giving breast milk (IF you can) but please please dont beat yourself up about it - its hard enough just surviving with a baby and a toddler to start beating yourself up about not BF'ing. Too much pressure. As long as the baby is fed that is all that matters! the big battle is sleep and as long as you try to nap once a day while baby naps you will find the energy to get through - and remember it will go so fast you will turn round in a few months and wont be able to remember these long days and this small baby that was xxx

Peas have you been to your GP yet? Since reading your post so many things you said resonated with me I am also going to see my GP as struggling with anxiety too :(

Hi Michelle - thanks so much for your lovely comment and sorry it's taken me so long to reply!

How are you feeling, did you see your GP?

Send me an email on peasontoast@gmail.com if you want to chat xx

You can book call girl in Guwahati or escort Service in Guwahati for incall facility or
outcall Facility as and when required.To book Guwahati call girls you
can visit the following links
Guwahati Escort
Escort Services in Guwahati