This Friday, Flo will be one month old.

I've single-handedly [husband helped too, to be fair] trained my daughter to feed from a tube, while sucking on my finger, therefore training her to like my nipple again. No bottles, and helping to 'outgrow' this tongue tie that they think she has. But not 'serious' enough for the snip.

Basically, it's been balls, but I have got there in the end with her now exclusively breastfeeding. Where's my medal. No, come on, WHERE'S MY MEDAL PLEASE? With all the pressure (subliminal as it is - it is never direct pressure, oh no, it's always little chirps like, "Breast is best!' and 'It's your choice, of course it is, formula is fine,' with a not a helluva ultra-convincing grimace, but there you go), there must be some kind of ACCOLADE I get for persevering like a motherfucker here?

(Yes yes yes, I know breast is best. I fed Sebastian a la boob for 6 months, and I can only hope I can feed Flo for as long as my udders allow - God knows I'm expressing after most feeds to keep the old supply banging away...)

Anyway, thanks everyone for your lovely comments, advice and support on the below post; desperate times. As someone so correctly told me, "The difference between hope and desperation is a night's sleep." Well, I still haven't had a 'night's' sleep in four weeks, but I feel like we are all coping better and getting into our groove.

That's until my mum leaves in 10 days, and then the apple cart is probably going to veer off the road and hit a tree, apples running amuck about the place. With me running after them, two children on my hip, not having brushed my hair in five days.

We have ventured to the park again a few times (the one where I had a fight with a chav about whether her precocious 8 year old son who had kicked a ball into the side of my head, was lying about the fact that I said "Ferfucksakes" to him.*)

Anyway, here are some adorable pictures of my offspring, because even amongst the chaos, they're mine though. 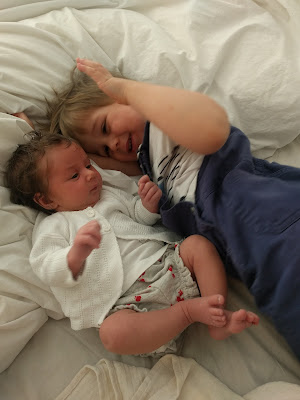 He loves her, really. 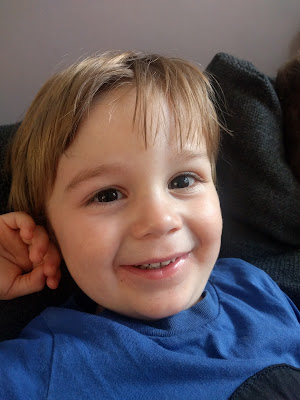 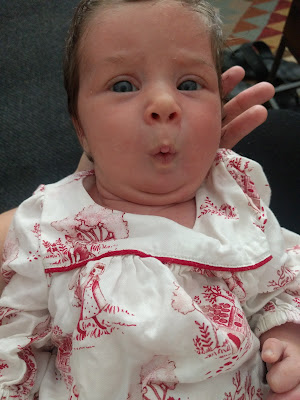 That was an explosive one... 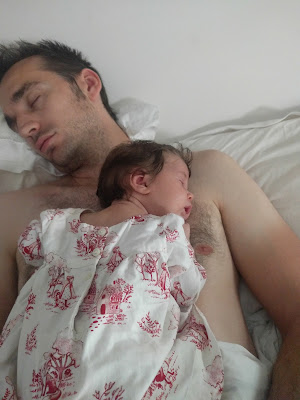 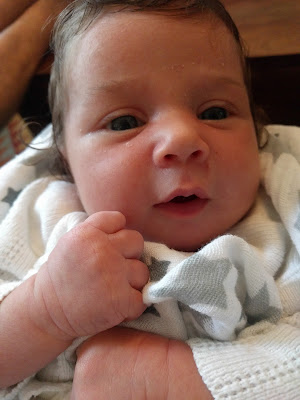 Now. I should probably join some mum's groups and get out there soon and make some friends...and get to know this area a bit. My confidence is pretty darn low right now, so this may take some time...


*I almost said it, but willed myself to stop with my throbbing ear. He then accused me of swearing while I said he should damn well apologise, and then his mother intervened and said, "Oy. OY. Didju just swear at me son?" No I bloody didn't, but you should teach your son some MANNERS and apologise for kicking this ball into my pip. While my breasts are leaking milk down my dress.

They are both adorable Peas! I remember reading your post when your Mom was about to leave you to cope with Sebastian on your own and you managed fine, didn't you? :)
Well done on persevering with the breast feed, I would have thrown in the towel! In fact, I did and both of mine were bottle fed in the end and developed perfectly. :D
Best of luck with everything.

I totally would have sworn at the little son of a bitch.

Ah, this stage is the worst. The "will I ever fucking sleep longer than 4 hours at a time again?" stage. I hope it passes for you soon.

Wao, Amazing Blog Mam! So when you need to write next blog then choose this font family;

Maybe you are also looking for the right person to ensure the higher quality
sex and that’s why you are in this place because here we are going to share
the data and information of Guwahati Escorts.
Escort services in Guwahati
Call Girl services in Guwahati