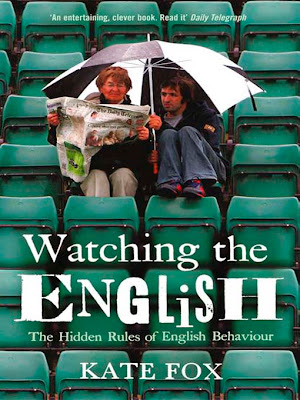 Did a hang of a lot of exploring this weekend with the Brit.

Asked him to take me to Brixton Market. Sit in a square that was dedicated to the Sharpeville massacre, with Jamaicans putting on a show about Jesus nearby. Word. While the fresh waft of fish from the market stung our nostrils.

Also chowed down a curry in Whitechapel before seeing my flatmate's birthday in. The dudes I live with are nothing short of fantastic. The one (who's birthday it was), wear's a blue velvet blazer to work everyday and red corduroys and a cravat.
They are both lovely lovely boys.

In lieu of trying to befriend the British, and trying to understand the bizarre foibles that may crop up as my journey into English life goes on (one month yesterday!), I went to a bookstore and bought Watching The English:The Rules Of British Behaviour.

I have only dented the first chapter on weather, cunningly written by an anthropologist. So far it's fucking fascinating.

For one, she refutes the whole 'the Brits are obsessed with their weather' scenario. For although they don't experience tornadoes, golf-sized hail storms raining from the sky, crazy blizzards, the entrance point to almost every conversation will start off with:

Nice day isn't it?, or It's a bit cold, wouldn't you say?, or Oh dear, didn't think there would be rain today.

This much I know, as do people that live in Yemen even.

The part that's interesting is how you should interact with weather-speak. There are rules I didn't know about. And these are, simply put:

1) Never, ever disagree with the person that starts the commentary;
2) Never not say something back.

Basically this is right:

This is wrong. And will make the weather-speaker feel awkward and uncomfortable, and is very much frowned upon:

Brit 1: Ooh, turning into a bit of a cloudy day isn't it?
Brit 2: No, I think it's rather warm actually.

Always agree, as etiquette usurps logic. You can turn it around and contradict yourself - apparently that's absolutely fine (?) - but always start the sentence with Yes, it is cloudy. Although I don't feel the cold much, so feels rather warm to me.

Never just ignore someone or nod when they spark up a conversation about the weather. It's considered the height of rudeness, because although they're talking shit, it's seen as a greeting. Weather-talk is a greeting, it's code for 'how do you do.'

Then there was a whole chapter on 'Weather hierarchy.' Which means you'd rather talk about or focus on the positive aspects to the discussion. For instance you'd rather say:
It's cloudy, but luckily it's still warm isn't it?, as opposed to It's cloudy and cold, everything sucks balls.

God. So much to absorb. I excitedly showed my Brit the book with an enthusiastic, 'Look sweetie! I'm going to learn all about you and your nation!' with two little Brits on the cover, shivering in the rain, whilst reading the Torygraph. He wasn't that amused, and said that the weather speak is probably bollocks.

It was the 'probably' in his sentence that will make me read on.

In other news, cor blimey it's happened again. And this time, I am going to strike back.

Peas: I was so retarded the other when I thought it wouldn't rain.

Ozzie: Did you just say...'retarded.'

Ozzie: OK. In this country, the word 'retarded' is very offensive.

Peas: [Wondering whether she should ask 'As offensive as, say, the word cunt?'] but instead, said 'Er..sorry I say that all the time, not in reference to the mentally unable, but in reference to myself and how...retarded I can be.'

Ozzie: No. You can't say that.

Floored. 'But but...' Luckily my Brit steps in.

Brit: Look, we call each other retarded all the time. You are in social work, so that's probably why it's more offensive to you. So we understand.

We go out and call each other retards for the rest of the afternoon. Outside. In open spaces.

We come home, to a small window of television, flop on the couch, where an ad pops up, loud, clear and wonderfully awesome:

Retardex! The latest in mouth cleansing technology! Mouthwash so unreal, you'll taste it for hours afterwards! Retardex can be found on shelves NOW!!....Retardex! For your mouth!

I just burst out laughing and couldn't stop. Whoops, how juvenile and retarded.*

*For the purists, who will no doubt get their knickers in a twist. I would never refer to anyone who is actually, physically or mentally, or otherwise, mentally challenged, in my midst/proximity, a retard. Before you bleat. Can't believe I even have to say this.
Posted by Peas on Toast at 9:49 am

I don't suppose your housemate is aware that she and others like her are directly respsonsible for making words like "retarded" offensive? It used to be a neutral descriptor, but thanks to the over-sensitive PC squad, we keep on having to find new terms for deficiency. These new terms subsequently take on offensive connotations and the cycle repeats (the words "special" and "challenged" are good examples). Not that I'm complaining, because I rather like the idea of having a steady stream of new insults regularly released into the language.

I know, the retarded thing is so retarded. By making a word taboo and giving us a new one, the new one becomes the "insult". "Special needs" is supposed to be the politically correct word now but it is already used as a major insult.

kyk - you're 100% right and wish I'd thought of that when she blikssomed me with the whole 'do you have ANY idea how insulting that is.'
She works in social work, so I hope that these kind of instances are few and far between, but you're so right - just when will there be censorship on the word 'special?'
Arrgh.

po - I'm telling ya, if this continues, we'll soon have no more words to use at all. They'll be considered unPC, and soon the human race as we know it will be mute...and ironically enough, come off being retarded.

I can be so Juliaaaas sometimes!

Your housemate's attitude is so Juliaaas!

My profile pic is so Juliaaas!

Stomach in, chest out!

Aussies making PC? That's begging for a comeback, Peas. Open a can of "we had Apartheid, sanctions, bellygazing, and a cathartic TRC process - and your white settlers? Let's see, exterminated most of the original inhabitants, stuffed the rest in reservations, plied them with alcohol, forgot about the whole sorry business and moved on to being racist about your Asian immigrants and rooting out unAustralian behaviour like Muslim head scarves..." on her.Controversial? (Ducks head)

tyrone - love the juliaas jib, just a pity it would go right over her head :(

Margot - now you're talking. Now we're cookin. This is gold. All I have to do is start it with 'so tell me about Abborigines.'....could you imagine!