what's on your doorstep 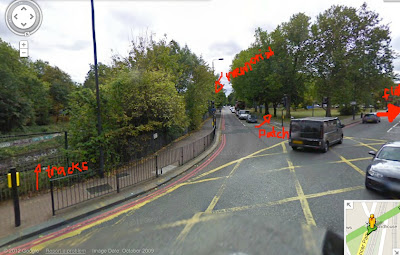 Just had my second visa experience in a month and nearly exploded from frustration.
I'm too frustrated to even write about it, so I'll be an adult and sidestep this fucking disaster of a passport I have for something I discovered this weekend instead.

Last week a year ago, we moved in. And while there is endless history in London in general, when shit went down right outside your doorstep, therein it becomes really interesting.

Something terrible happened right in front of our flat. Just beyond the grassy patch below us, 23 years ago.

So next to the train lines/ravine, and next to the grassy patch and road, is this concrete slab thing. I've never taken much notice of it until now. Why would I? It was just part of my morning view.

Then, because I love trains, (the engineering, how they work, and how disasters could've been avoided, etc), I read a lot about them and came across the slab in my research. Turns out it's a memorial for the victims of one of the largest train crashes in British history.

Right outside our flat, in December 1988, three trains collided into each other due to faulty signalling and bad workmanship. A fourth managed to stop in time.

A train coming from Poole collided with another stationary train from behind, flattening most of its carriages. Shortly after, a third train coming in the opposite direction ploughed into the mess. Over 500 people sustained serious injuries and 35 died. In horrific circumstances.

Many were attended to on the scene, cut out of the wreckage, some operated on (they used the grassy patch as part of the medical area), and dead bodies were carried up from the ravine. Will refer to area as 'grassy patch,' not grassy knoll. (Kennedy wasn't involved. For once.)

The only action I've seen on the grassy patch since living there is a tramp taking a dump under the tree. In full view of everyone.

The Clapham Junction train crash happened literally on my doorstep. And the 'slab' is a memorial. We walked up to it to get a better view. 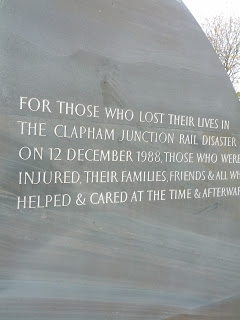 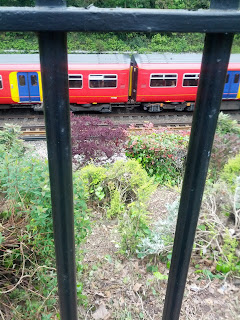 Trains in the ravine, below the memorial, where a garden has been planted around the scene of the accident in 1988. 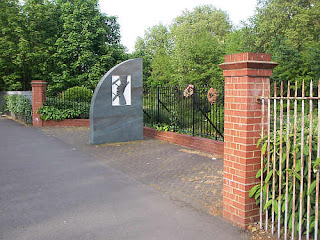 I pored over the files and investigations, I couldn't believe this happened right here. The best, and most detailed imagery of the crash were from Getty Images, as seen here: 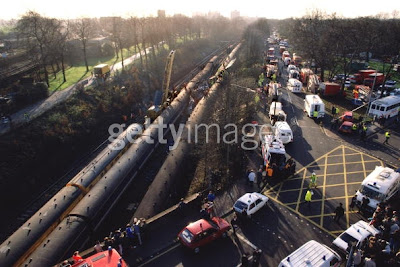 This is a crazy picture for me. Taken from the roof of our local pub, The Roundhouse, overlooking the Battersea Rise bridge. The grassy patch to the right is filled with ambulances, and the train wreck is pretty much below where the memorial lies. 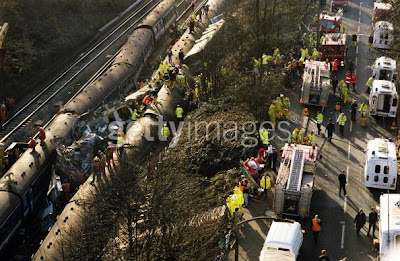 It was an horrific crash, by all witness accounts. 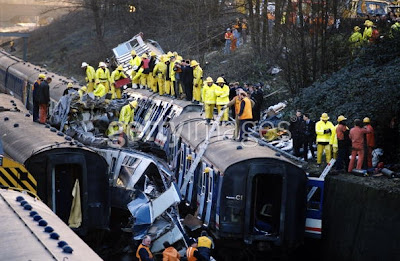 If you're interested, you can check out the pictures here.

Maybe something more positive happened near to where you live that you didn't know about - maybe The Queen had a cherry bakewell tart in the local tearoom once, or John Lennon dropped his sandals on your doorstep.

There was a train wreck on mine. Who knew.

You should totally check out Geocaching (geocaching.com). An excellent way to find out more about what's around you.

You should also look for a book called "I never knew that about London".

cestlavie - Never heard of it, but love it already - thank you so much. I may even sign up to the Premier package where you get to see more items. Thanks a mill!

The Pete - howdy! Now I have heard of this one, LOVE this kind of stuff.