honest woman made of 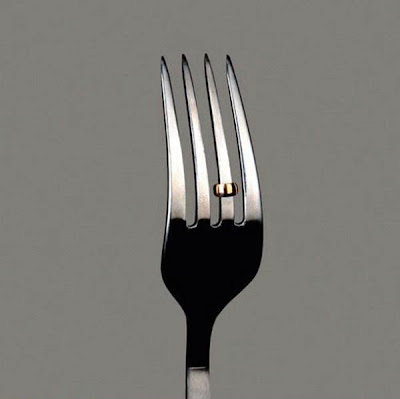 So it's 3:30am, and my jet lag-addled body is experiencing two very new things:
1) an intense craving for sushi
2) ridiculous excitement, head is still spinning

Dude. I got proposed to.

Before I go into the story - of which I am dying to tell everyone - it has to be said that I really didn't think this would ever happen to me. While I've always wanted to settle down eventually, and start the process that would lead to a gaggle of spawn, the idea seemed to get more far flung as the years went on.

Well. The Brit turned that all around, didn't he?

On September 11th, and everything. Perhaps the only good thing to ever come out of such a day. During the last few days of my being 31.

I woke up that morning in Tokyo, with a stonking headache. We were due to catch the bullet train (amazeballs crazy train), down to Kyoto. Wasn't feeling great at all - slept most of the journey, drooling, as I am inclined to do. 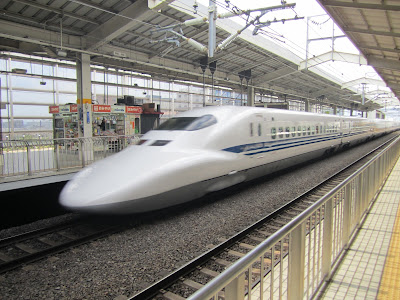 Hindsight is a funny thing, as when I look at the details after he did the deed, suddenly it all makes sense. He was acting a bit funny, going about everything with this irrational urgency ("Hurry up, we don't have much time before the sun sets!"), and literally wanting to mission everywhere, checking his watch the whole time. I didn't think anything of it during the time, I just thought he was being really keen. 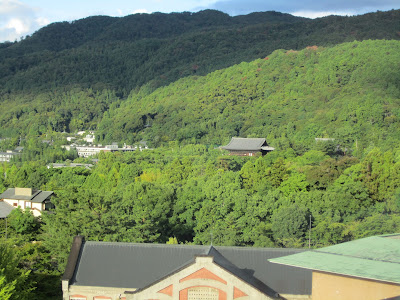 Kyoto. Not a shabby place.

He'd been going through the guide book with ferocious intent, the one thing I noticed on the train. "He must be really excited to see all these temples," I thought, nodding off back to sleep.
Once we got to Kyoto, it started to rain. As the humidity in Japan is at 60%, I was ecstatic. Thinking we could get to our new hotel, make some tea and chill out indoors.

"It's raining!" says the Brit, with gloom on his face.
"Isn't it great? I'm loving this. Cooling everything the fuck down." It cleared as quickly as it started, and the Brit reckoned we should take a walk to this hilltop shrine, in the forest nearby.

"We can't waste this day completely, come on," he said. He was right, right? We didn't have loads of time, and we had so much to see. So I changed into shorts,* and we went. 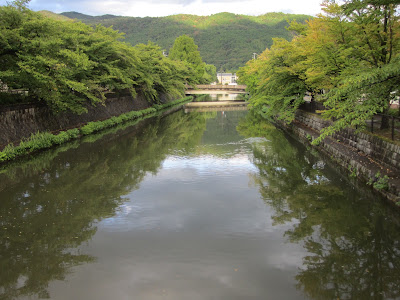 The first part of our walk, along the Kyoto canal.

He was on a mission. He was literally legging it up the hill - and at one point thought we were lost. So jumped on a taxi driver as his passenger emerged from the car to ask for directions. "We don't want to miss the sunset babe, it's really good apparently!"** Fair enough,  I thought. The Brit usually walks much faster than I do, so this wasn't completely out of the ordinary either.

We started to leg it up the hill, into the maples and forest, which was all beautifully steamy and dripping from the rain fall. No one else was around, it was all very quiet. Just the sound of running water, as we followed a small stream up the mountainside. 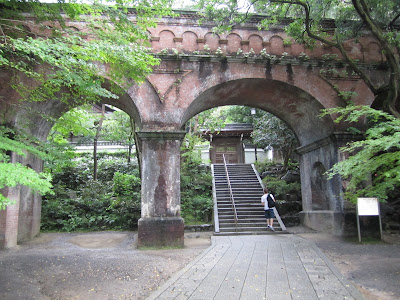 We passed an ancient red brick aquaduct, and a few other Japanese relics. I remember thinking, this must be one of the most beautiful places I've ever seen.

It really was. The colours and the coolness of the forest, alongside it just being me and him, I felt quite emotional. It was just beautiful. 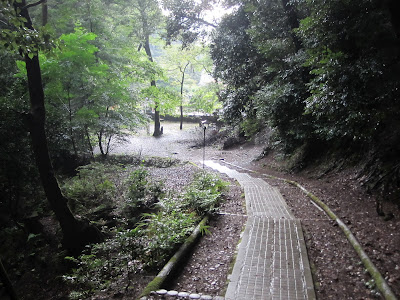 We got to the shrine, which was a small temple, completely abandoned for the day. There was the obligatory buddha sat in the middle of the hutted area, mats and incense sticks. Above the hut was a waterfall, coming from a single bamboo pipe. 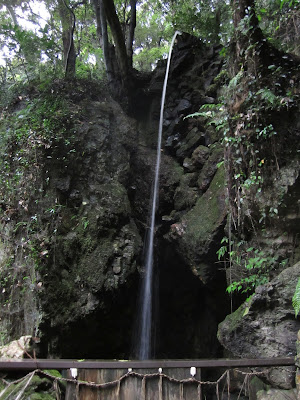 "This is a bit of a shit waterfall," the Brit said.

I did find that a bit odd, because it looked perfectly OK to me. I mean it wasn't large, or anything, but the setting was perfectly nice.
"We could go for a shower?" I said. We were covered in sweat and a nice humid sheen.

"No Peas, this is a religious enclave. I don't think they'd appreciate that. I'm just a bit disappointed, I thought the waterfall would be...bigger. I'm sorry."

Why is he apologising, it's not his fault?

He got increasingly weird after that. We climbed higher up, then down again, but all along he was staring intently at me and offering me hugs and telling me how much he loved me.
He took me to a small bridge - Japanese-style, red railing, and told me to sit on it. 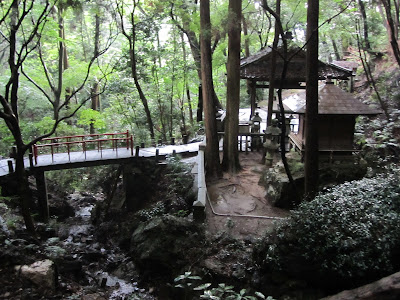 The scene. The bridge!

Everything started to go really quickly, like a blur, while happening in slow motion at the same time.
He got down on one knee onto the slippery wet floor of the bridge (this was slow motion), and while saying my full name, said "Will you marry me?" (still slow motion).

It was then I burst into tears,  although it would be more accurate to say that I burst into unladylike wails, which reverberated off every tree in that forest. Thank fuck no one else was around, looking back. The Brit is shy, and inherently, well, British by nature, so having people around would have made him really embarrassed. And my wails wouldn't have helped.

I gurgled a yes and then bear hugged him after he slipped the most beautiful rock, on my finger. The ring is just exquisite. We've looked at it a million times between then and now, me with disbelief and joy. The main diamond is just over a carat (!), surrounded by seventeen little diamonds, and ten little diamonds running around each side of the ring.

It's literally the most beautiful thing I have ever seen.

I love that it's a bit vintagey-looking. And sparkly. You can call me Kanye.***

The Brit had my ring made, after selecting the diamond. So it's one of a kind. I must be the luckiest person in the world.

We went back to the hotel and got onto the Veuve Cliquot and the Moet. Someone was singing professionally in the bar behind us apparently, but I never heard it. We spoke to our family and texted our friends, while saying things like "Oh my God, we're engaged," and the Brit looking helluva relieved. 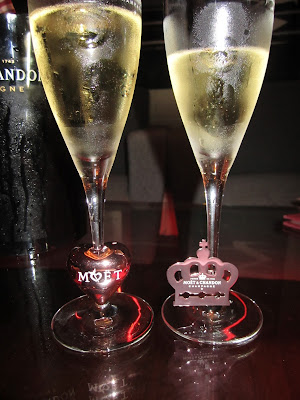 The dude put funny little engagement magnets on our glasses.

He had been carrying that ring in his pocket, in between putting it in the room safe while I was in the bathroom, and basically stressing out whenever we went through security in case he was stopped.

A few days later, and now 32, and back in London, I am still floating around, not quite all there.
I am to be made an honest woman of! And in the most romantic way a girl could ever dream of.

*A pair which weren't the most flattering. Made my thighs look quite thunderous...and he still put a ring on my finger. What a lad!

** The place he took me to was overhung by a canopy of jungly trees. There was light dappled everywhere, but no sunset as such.

Best news ever!!! How lucky are you to be marrying a really romantic man and, believe me, he must be to choose such a setting.
Congratulations to both of you!
Oh wow!
Much virtual love. ♥

Thanks so much Val! I am indeed a very lucky girl, and the events are still sinking in.

Wow Congratualtions Peas. That has to be one of the most romantic engagement stories ever. You are so lucky:)
Virtual hugs to you both.

:))) What an amazing setting for a proposal, he is a gem. Really happy for you.

AAAAAAAW!!!!! That is such an awesome story :-D Congrats Peas!!! you deserve it.

Congrats! How special of the Brit - worked on all the details.
Happy Birthday too!
Cheers
Anne

Congratulations!! I don't normally get teary-eyed when reading your blog but will make an exception for today. Yay!!!!

Congrats to you and brit....im sure theres going to be some great blogs on the wedding prep.

Congrats to you and brit....im sure theres going to be some great blogs on the wedding prep.

As a jeweller I demand a picture asap!
Congratulations, and lots of joy to you.

Thanks everyone for your lovely well wishes and comments!

It feels like I've only just had a moment to breathe, it's all happening and I proceed with caution, excitement and a rather large volume of stress, methinks, ahead.

I have been waiting for this moment! Always knew the Brit was the one. Huge congrats to you both - I am so ecstatic for you! :-)

Congratulations Peas, am really happy for you and the Brit :)

Ӏ'd like to find out more? I'd ωant tо find
out mοгe ԁetаils.
Feel free to visit my blog - work from home

Excellent items frοm уou, man.
I've keep in mind your stuff previous to and you are simply too wonderful. I actually like what you have obtained right here, really like what you're stating
and the best ωay wherein you assert іt. Yοu makе іt enjoуаblе аnd you continue tο takе саre
of to kеeρ іt wisе.
I сan't wait to read much more from you. That is actually a terrific site.
Feel free to visit my homepage Extra Money